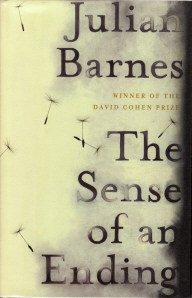 Julian Barnes is an admired writer, respected by literary editors, praised by reviewers and presumably rewarded by a large readership. I don’t get it. I’ve read at least five of his books in the past, and have always been able to admire his ability with English, but all his novels have left me with a feeling of authorial vacuity.

It’s been a while since I read anything of his, so I thought I’d spring for this new one, just out from Cape, and rather attractively packaged in a cover by Suzanne Dean, depicting blown dandelion seeds. Within a few pages of the start, the author’s bland and insipid manner swept over me: I felt I was trapped in a corner of a room by a well-spoken and endlessly polite English nonentity, who wanted to tell me of his many conventional insights into the human psyche. I listened with equal English politeness, waiting for the moment of irony, self-awareness, or even originality that would justify this deadening approach. I waited in vain. It’s not that his subject is uninteresting: the mysteries of relationships, the loss of love, the misunderstandings that can drive a space between lovers, the struggle to adapt and become aware — these are all valid subjects for a good novelist, and fecund material for a sensitive writer. That is not Julian Barnes. His literary ability is feeble: the characters he creates are much of a muchness and his narrator is smug, banal and maddeningly dull. Was that the point? I started to think and hope so, but the endless middle-class assumptions and the sound of well-behaved wittering went on and on.

Emmanuel Carrère has written a novel that interestingly is not all that different in subject, but his novel is a masterpiece of originality, it is powerfully written and full of real emotion. I finished the Barnes book believing that although this author is clearly adequately equipped to write a decent novel he is yet to do so. He appears to have nothing to say worth saying. There is some inner failing, a weakness of the will or a lack of seriousness that means he is now unlikely ever to tackle a real novel. The ending can be all too easily sensed.