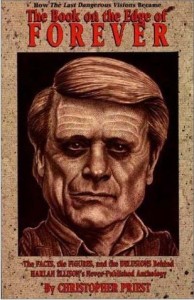 Published: Fantagraphics Books, 1994. ISBN 1 560 97159 2 [paperback $6.95; pp.56]. Still available in new and s/h copies through Amazon, although because the book has become a collectible item (but presumably not by Mr Ellison’s admirers) prices are now somewhat inflated.

An enquiry into the facts behind the non-appearance of a science fiction anthology called The Last Dangerous Visions, a project that was originally announced in 1971 but which was never in fact completed or delivered to the publisher, let alone published. Constantly hyped and boasted about by its editor, Harlan Ellison, and frequently promised for imminent completion, the incontinently overlength book was subjected to years of editorial procrastination. As contributors began to ask when their work would be appearing, Mr Ellison announced false publication dates at regular intervals, and produced untrue testimony from hapless acquaintances saying (apparently under duress) that they had personally seen the completed manuscript. None of this was true and could not be, and none of it would in fact matter but for two things.

Firstly, a lot of writers have seen their stories held in limbo for several years (and in most cases for decades).

Secondly, many writers who tried to recover their work to have it properly published have been treated abusively by Mr Ellison. Examples of his bullying tactics abound, and many are reported by the victims in the pages of this book. For this latter reason, and the understandable wish to enjoy a quiet life, most of the contributors have preferred to abandon their stories. To this day the manuscripts (most of them written on typewriters!) remain somewhere in the depths of Mr Ellison’s house. Of course, in the forty-five years (plus) that this storm in a teacup has been continuing, some of the writers have given up writing altogether and a large number of them have died without seeing their work in print.

Christopher Priest’s short book on the subject was written more than twenty years ago in the spirit of investigative journalism, and treated the matter as one of professional concern. Even as long ago as that, Mr Ellison’s unfinished project had become scandalous. Priest contacted many of the victims direct and assembled a collection of letters, reports, personal accounts and experiences, and from these mounted a dispassionate account of the rudeness, inefficiency and waste of time that have characterized dealings with Mr Ellison.

The project will never be published in printed book form — Mr Ellison’s rights to the material expired years ago — so Priest’s account (which campaigned for Mr Ellison to abandon his lazy and bullying ways) now has historical interest only. It remains the only published critical account of the saga of incompetence and untruths.

On publication, an attempt at a lawsuit of course followed. Mr Ellison is someone who never misses a chance to proclaim his commitment to free speech, except when the freedom is exercised about him.

In spite of Mr Ellison’s attempts to persuade people that The Book on the Edge of Forever is no longer in print, it remains available. An ebook edition is still possible.

Amazon publishes a number of notably partisan reviews, both pro and con the book, and extracts can be read in the reviews section of this website.

One of the reviews reprinted here (given one star and headlined Meanspirited Jealousy) takes partisanship to a new high, or low: signed only as being written by “A reader”, it bears all the hallmarks of Mr Ellison’s own unmistakable style: florid overstatement and a fog of half-truths intended to cloud the issue. Well worth a visit to witness the great man in action, a rare sight!