A male hippopotamus escapes from a private zoo – it is shot with high-powered rifles and the marksmen pose with the body for photographs. The entrails are buried on the spot and the head and legs are sent to a research laboratory in Bogotá. This particular hippo was one of several who broke out of their enclosure — most of them were not hunted and are now feral in the surrounding area. The zoo was owned by one of the richest men in the world and was part of a heavily guarded private compound called Hacienda Nápoles (“Naples City in Italy”). As well as the zoo, the compound contained an artificial lake, numerous pieces of sculpture and life-sized models of dinosaurs and a mammoth. The compound was owned by Pablo Escobar, a drug lord, trafficker and terrorizing murderer – over the gate was a replica of the single-engined aircraft in which Escobar’s drugs were delivered to the USA. After Escobar was cornered and killed, and his cartel dismantled, his former fortress has been opened to the public 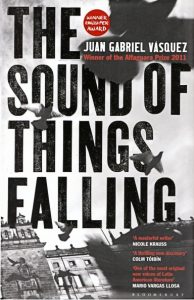 All of this is real, not fiction, but it provides the opening image of the novel The Sound of Things Falling, by Juan Gabriel Vásquez. Vásquez is a Colombian writer, born in Bogotá in 1973, but who moved to Europe after he graduated from university. He lived in France, Belgium and Spain, returning to Bogotá four years ago. Although Things Falling is his sixth novel, it is only the third to be translated into English (all of them by Anne McLean, who has won several awards for her work).

Vásquez pays tribute to his eminent predecessor, Gabriel García Márquez, but distances himself from magical realism, claiming that the genre requires the reader to reinvent history, or the truth. Things Falling is a realist novel, with a strong narrative voice. Even so, the style is leisurely, considered, evocative of landscape and feelings and character.

The story is about Antonio Dammara, a disaffected law professor living and working in Bogotá. He is seriously injured when he is struck by a stray bullet while in the company of an acquaintance from his youth called Ricardo Laverde. He has not seen Laverde in many years, who has aged badly and has become a withdrawn, enigmatic person. Laverde is killed in the drive-by shooting. After a long and painful recovery, which indirectly causes his marriage to start to fail, Antonio determines to find out the reason for the murder. This involves an exploration not only of Laverde’s past but of his own, growing up in Colombia while the country was held to violent ransom by the drug wars caused by Escobar and his cartel. His discoveries about Laverde’s life, the story of Elaine, Laverde’s American wife, and his only daughter, Maya, make up the substance of the book.

It is a highly unusual and ambitious novel, one of the best I have read recently.