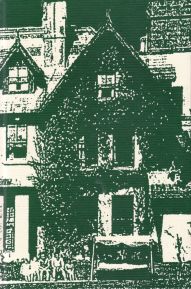 At the end of my appearance yesterday at Blackwell’s, in Charing Cross Road, someone gave me a beautiful copy of his book called Netherwood, about the final years of Aleister Crowley’s life here in Hastings. In the general confusion after the talk I neglected to note his name, but I assumed it would be inside the book so I could contact him later and say thanks. However, Crowley-like, the information is a bit diffuse. (Byline: “A Gentleman of Hastings”.) Please make contact with me, so I can communicate with you direct?

One of those Crowley coincidences must have been going on. Because our house is currently more or less uninhabitable (two rooms with the floors up, and builders and their equipment everywhere) we are taking many of our meals at a pub called the Robert de Mortain. This large building on The Ridge is just about the only remnant of the Netherwood estate, which was Crowley’s last home. The main house and grounds are now something called Netherwood Close, and covered with the mass-built houses of Mr Wimpy or Mr Barratt.

Thanks to all who turned out in yesterday’s sometimes foul weather to go Blackwell’s. It was great to see so many people there, and I was really sorry the thing had to end so suddenly. I would have liked the chance to chat more informally at the end. Now back to the mundane realities of Hastings.

Sometimes, I get things wrong. Last week I posted here a list of copies of past titles which I am selling off to free some space in this crowded house. But my timing of this was really insane.

The day after the post went up I had to go to Paris for three days. Today I am back but we have no food in the house – and anyway it is publication day for The Adjacent. At the weekend I am doing a launch of the book in London, on Sunday I’ll be moving furniture and on Monday we have builders coming in to repair part of the floors.

Meanwhile, I have received a stream of orders for the books and I’m simply incapable of dealing with them for the time being. If you have sent an order, please be tolerant. I have kept each one in the order in which I received them and for those that arrived before I went to Paris I have set aside the physical copies. The rest I will treat in strict order of receipt, and I will contact everyone direct as soon as I can. However, it might be a week or two before I can get around to everyone.

A few more spare and extra copies of CP’s old books have come to light, mostly in surprisingly good condition. We need to make space in this house crowded with books, so once again I am offering several of these titles for sale. Signature and/or dedication (or freedom from all such marks) available on request. A beautiful handmade bookmark, with vulgar self-commendation, is included with every copy from the main list. All the books are in the original English, some being UK editions, others from the USA. (All are described accordingly.) Most are first editions, although there are a few book club editions (again, marked appropriately).

Translated editions are also available, with a link to the dealer who now holds all available titles. Many of these are beautifully printed hardcovers with dust-wrappers. None of the translated editions is signed, but that can be arranged if you are interested.

Please note that the numbers available for each title are strictly limited, and in some cases there are only one or two copies available. It would be a good idea to email me from the Contact page on this website to check availability before sending money. The list will be kept updated, so it should give a  good general idea of availability at any time.

Prices and payment. Each book has a core price of £4.00, but I do need to charge extra for post and packing. Postage costs in particular have recently been increased in the UK, and the Post Office’s concessionary rate for books sent overseas has been abolished. The current rate works out at about £2.00 per title when sent inland, but significantly more when sent abroad. There are savings, of course, if several titles are ordered at once. I’ll quote you in advance. Payment by PayPal is acceptable (the contact email address can be used), but because the average PayPal commission is about 5.5%, direct payment by internet is to be preferred. I don’t have to pay a commission to the bank. (Details sent on request.) If you order from within the EU, I can supply SWIFT and IBAN details; if you are ordering from further abroad I can accept cheques in pounds or dollars. A receipted invoice is sent with every parcel.

Because we had business in nearby West Byfleet, and it was a lovely day, we decided to drive on afterwards to Woking for lunch and have a look at the Wellsian sites there. I take my duties as Vice-President of the H. G. Wells Society proudly and seriously, if somewhat intermittently. 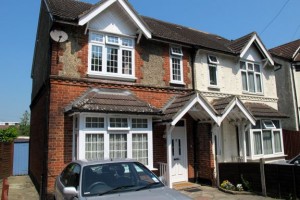 We went first to 143 Maybury Road, to which Wells had moved in June 1895. The house then was named ‘Lynton’, a small semi-detached villa opposite a railway line, but with a garden at the back. Woking has its own huge Common in Horsell, apparently visible from the top floor windows of the house, and there and in the surrounding countryside, Wells and his second wife Amy Catherine (who was known as Jane), took frequent bicycle rides. These trips were part of the inspiration for Wells’s 1896 novel, The Wheels of Chance. The photograph shows 143 Maybury Road as it is today. A commemorative blue plaque seems long overdue, because this is the house in which The War of the Worlds and The Invisible Man were written.

Please note that the photograph of 143 Maybury Road shown on the Woking website about H. G. Wells is incorrect. It is also incorrect on Wikipedia. The house shown on both these sites is actually no. 141, and has no Wellsian connection. 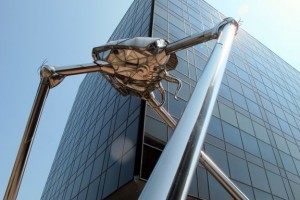 Next, we moved to the centre of the town, where in 1998 the artist Michael Condron installed his breathtaking sculpture of the “Martian Walking Engine”. This a beautiful piece of work, not only a fine sculpture in its own right but accurate in many details to Wells’s descriptions in The War of the Worlds. It is almost the right size: Wells said the tripods were at least 60 feet high, and the sculpture is not far short of that.

Close beside it is this smaller sculpture, depicting one of the Martian cylinders after its dramatic nose-first crash landing in the sandpits of Horsell Common. And speaking of which, we concluded our mini-tour of Wells memorabilia with a walk across the Common in search of the sandpit itself. It is not at all difficult to find, as there is a large map of the Common in the car park, with the main features clearly shown. Because of the long winter just finished, and the delayed spring, British trees seem incandescent with brilliant green at the moment, and the walk under the tall pine trees (with a few large young oaks growing up between them) was an inspiring and reinvigorating experience. 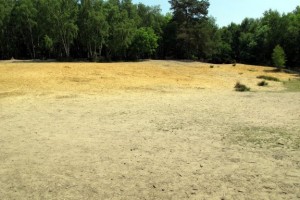 The sandpit itself is still much as it must have been in Wells’s days, at least before the Martians came along and ploughed everything up, and as it was a weekday we had the place almost entirely to ourselves.

I should have noted at the beginning of this post that a spoiler for The Adjacent is contained within.