Tom Hunter, current director of the Arthur C. Clarke Award, wants to open the prize to self-published novels. He is at present uncertain how this might work. One way he is mooting would be to throw it open to anyone, but charge each writer the same submission fee presently paid by publishers. Another proposal is to allow the panel of judges to call in self-published books. The two could or might be combined in some way.

But it seems to me that this begs the question of what a self-published novel actually is. For example, an ebook made available by a writer through Kindle is self-published — Amazon is only the distributor. Amazon does not act or function as publisher, and the writer remains the de facto publisher.  So here is a definition that might be helpful:

That strikes me as a clear, uncontroversial and defensible statement of how self-published novels, intended to be submitted to a literary award, should be defined and regulated. It also accepts by implication that there is a difference between self-published texts and professionally published books. Although it is always unacknowledged by those who campaign for literary parity, here is the difference:

A book brought out by a trade publisher goes through various processes and tests before it is printed and distributed through bookshops.

None of these steps, or almost none, will apply to a self-published book. It is nothing to do with elitism (a frequent charge against people who know the difference). Writing is a profession. It has standards.

More than one hundred books are submitted for the Arthur C. Clarke Award every year — 113 were sent in for the 2016 prize. That’s a lot of reading to get through in a matter of a few weeks, and if the floodgates were opened and the commitment had to increase I believe it would become unworkable for most people. If self-published books were regulated as suggested above, then perhaps numbers would stay more or less where they are.

While on the subject of the Clarke Award, and knowing that no one can agree what it is actually “for”, it seems to me that over the thirty years of its existence it has tended to highlight well written centralist science fiction as well as more ambitious works which are pushing at the edges of the definition of the genre. Science fiction has always been a progressive form: it changes and improves and expands, and we look to something like the Clarke Award to reflect that unique literary spirit. In this it differs from fan-based prizes. Most of the people who have won the prize in the past have been serious about their writing, and the general tone of discussion has been, until recently, equally serious.

(Many congratulations to Adrian Tchaikovsy on his win! I hope it will have a significant impact on his career.) 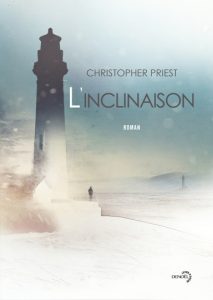 Here is the cover for L’inclinaison, the beautiful new translated edition of The Gradual, from Gilles Dumay’s collection Lunes d’encre (published by Denoël in Paris). It has been translated by Jacques Collin, who also translated The Adjacent.

It is due to be published at the end of September.

Yesterday, I received my first finished copies of Gollancz’s hardcover edition (see below), which is due to appear on 15th September. Sounds like a busy month — the following events are coming up, in addition to the books being published:

Wednesday, 14th September. I shall be at Waterstones in Bath, 4-5 Milsom Street, Bath — interview and signing. 6:00 for 6:30pm. Contact the shop for more details.

Weekend of 17th/18th September. With many others of the Gollancz authors I shall be taking part in this year’s Gollancz Festival, largely based in Foyles bookstore in Charing Cross Road, London.

Saturday 24th September. I am taking part in a celebration of H. G. Wells’ 150th anniversary at Bromley Central Library (Large Hall, 4th Floor, from 11:15am onwards). There will be several talks (including mine), a chance to view selected items from the extensive Wells archive, and a walk around parts of Bromley associated with Wells. More info here.

Sunday 25th September. After a mad dash northwards I shall be giving a talk called Reality, Memory and Doubt at Brighouse Library, at 4:00pm. This will follow a free screening of the film of The Prestige, at 1.30pm. (Perhaps this is the moment to say that the “Lord Colderdale” mentioned in the film, and the book, has nothing whatsoever to do with Calderdale, the local authority which runs the library.) More details here, or if you call 01422 288060.

Finally, just a reminder of the cover images of the English-language editions of The Gradual published in September, Gollancz (UK) and Titan (USA):

Ten years later, I think I have at last solved a small mystery. It concerns the actor Sir Michael Caine, whom I met in 2006 during the evening of the UK premiere of the film based on my novel, The Prestige. Never having had a film made of something I had written, not to mention never having been to a star-studded party at a film premiere, for me the whole evening was weird and weirdly memorable.

To recap (I have described this elsewhere): during the party, a stand-up affair in an uncrowded room, I saw Caine standing to one side and thought I should introduce myself. I thought Caine had done well in an underwritten supporting role in the film, bringing a kind of intelligent conviction to the scenes he was in. When I told him my name, it obviously meant nothing to him. I told him I had written the novel on which the film was based. The atmosphere suddenly cooled. He raised himself up, looked down his nose at me (he is surprisingly tall), and said, “I never talk to writers.” He immediately turned away and stalked off.

In all truth I think I was more amused than offended by this, although it was probably the one incident I remembered afterwards with complete clarity. I assumed that during his long career Michael Caine must have had many aggravating brushes with writers, some of whom are well capable of acting like arrogant shits. Even so, the mood at this party was low key and friendly, and one would think, wouldn’t one?, that in the cause of general harmony such past experiences can be temporarily set aside in the cause of good manners. Well, apparently not. 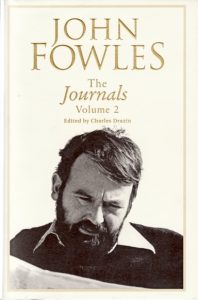 I have been recently re-reading the published Journals of John Fowles. In the second volume Fowles describes meeting Caine at the end of 1966 for the filming of The Magus. Both were then youngish middle-aged men, both had become suddenly famous and successful – Fowles was 45 (two best-selling novels, a film of The Collector already made), Caine 33 (starring roles in several films, including Zulu and the Len Deighton adaptations, and an Oscar nomination for Alfie). They met again and worked together the following year while The Magus was being filmed in Majorca. We shall probably never know what Caine thought of Fowles, but through Fowles’s unrestrained and often contentious journals we have the other side.

After their first meeting he describes “Mike” Caine as ‘a thoroughly unlikeable young man’ and ‘good at poker faced banter … but he’s got to give more than that.’ Although he later compliments Caine on his ‘exemplary behaviour between takes’, when he sees the first cut of the film he describes Caine’s performance as ‘excruciatingly bad, totally incredible as an English graduate’, and that ‘his failure pervades the whole picture, the one part we couldn’t afford to go wrong.’ (Later that day, Fowles reports that a large part of the cliff on which his house was standing has slipped into the sea. Maybe this informed his mood?)

I read all this when the Fowles diaries were first published, but because the comments appeared in a long book filled with similarly disparaging remarks about dozens of people (including, as it happens, me) I didn’t take much notice. However, reading it again last month I suddenly made the connection – Volume 2 of the Fowles Journals was published in 2006, just a few weeks before the film of The Prestige was released in the UK. Michael Caine had clearly come across these remarks: someone must have tipped him off, or he had found himself named in the book’s index, while browsing in a bookstore. Suddenly, it all made sense to me, and for a few moments I even felt forgiving of him.