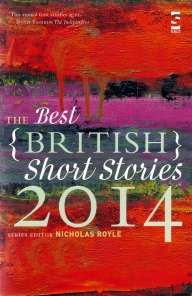 There are twenty short stories in this anthology: nearly all of them are good or interesting or unusual, deserving to be in a book with this title, nearly all are by writers whose work I had not previously come across. The publisher is Salt, the editor is Nicholas Royle.

Three of the stories are of outstanding quality, each one of which would alone justify the cost of buying the book.

“Getting Out of There” by M. John Harrison (first published as a chapbook by Nightjar Press – a Nick Royle imprint), is a story set in what sounds and feels like my former hometown Hastings. The sceptical, defensive mood of the seaside town on its uppers is accurately if selectively caught. The two characters have a marginal, edgy, entirely believable relationship, fleetingly based on knowing each other years before when they were kids. They both reek of authentic Hastings-ness. Mike Harrison is writing better than ever. His reputation seems overshadowed by his contemporaries – Kureishi, Swift, McEwan, etc – but they are shallow, minor, facile writers in comparison.

“The Faber Book of Adultery” by Jonathan Gibbs is the first story in the book, and it set a standard I thought would be difficult to match in what followed. A middle-aged writer seduces (or is seduced by) his best friend’s wife. They do it standing up, leaning against a bookcase. Perhaps that makes the story sound unoriginal, but the delicacy and natural observation of the writing makes the story exceptional. The sub-text is the man’s rambling, almost disorganized thoughts about books, the adultery that is always in them, the way adultery is written. Books are sexy. I particularly liked the description of a book pulled away from a shelf that is too tightly packed with titles: “When it came free, almost with a pop, the books alongside seemed to sigh into the space it left, their pages filling with air.” The story was first published in Lighthouse 1.

The book concludes with a story as good as, or even better than, the Gibbs. It is “Barcelona” by Philip Langeskov, first published by Daunt Books. A man plans a surprise anniversary celebration for himself and his wife, in Barcelona. In spite of several minor worries and problems – pre-existing plans, lost baggage at the airport, the presence of his wife’s former lover in Barcelona, a sudden illness – they arrive there more or less intact, and the holiday goes ahead. It is another story about the effects of literature: Langeskov riskily summons the ghost of Graham Greene, specifically in a short story he reads on the plane, “The Overnight Bag”, which describes a not dissimilar European flight. The uncertainties of the Greene story resound through the visit to the Catalonian city. I think the risk Langeskov took came off: “Barcelona” is a sort of post-Greenean study of a loving marriage, with its nervous ambiguities and shadows. From beginning to end the reader senses unease, things about to go catastrophically wrong, the impact of the past not fully comprehended.