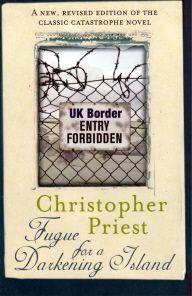 CP’s second novel, now revised, expanded and with a new Foreword. In its day Fugue was thought of as a modern version of the familiar ‘British catastrophe’ science fiction novel, but subsequent world events have given the story a sinister topicality. Tragic refugees escaping political and military upheaval at home are now all too frequently seeking asylum elsewhere. In Fugue, survivors of a terrible African war flee their blighted continent, and look for refuge in the countries of the West.