The Magic is now available as an ebook. 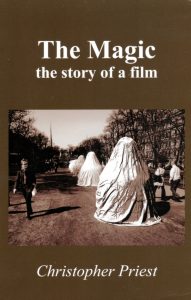 In 2006, Christopher Nolan directed a film of Priest’s novel The Prestige. It went straight to No.1 in the US box office, won rave reviews around the world, and ever since has had audiences arguing and debating. It is a film with a complex and intriguing plot, raising many questions.

From the hindsight of the intervening years The Prestige is unquestionably one of Nolan’s most interesting films to date, perhaps, as an increasing number of people say, his best. More recent Nolan films have been immersively strong on visual effects and striking images, but they have lacked coherent stories and believable characters. The Prestige stands out memorably against these films, while making skilful use of many visual and cinematic techniques.

Priest himself had no participation in the making of the film. The novel and the film have much in common, but there are revealing differences. The novel’s study of obsessive secrecy and compulsive curiosity became in the film a deadly feud between two gifted but deluded magicians. Different forms of storytelling create different narrative demands. The film and the book illuminate each other.

The Magic was written given the unique opportunity of seeing from the inside a novel developed as a full-blooded Hollywood film, by a skilled and original director. It is a complete portrait of the process, from the first thought that led to the novel, to the finished film.

The Magic is available in three formats:

The printed books were priced to include post & packing, but following a major increase in mail costs outside the UK, a small surcharge might be requested for overseas orders. Prices may be converted to local currency rates. If ordering the ebook, note that it can be supplied in various formats. To order, please contact direct: cp at christopher-priest dot co dot uk.

PayPal and internet transfer accepted, but not debit/credit cards.