Simon Spanton at Gollancz has sent me a couple of advance copies of The Adjacent. To Simon I therefore say, Thanks! No matter how many years I have been doing this, the moment when you see the first copy of your new book, when you hold the thing in your hand, is a memorable one.

The Gollancz edition of The Adjacent, I have to say, is a thing of exceptional beauty. Brian Roberts’s cover manages to be both understated and declarative (see the image on the side of this page), a lovely cool green, made iconic with silhouettes of one of the few British aircraft almost everyone can identify on sight. It’s appropriate to the story, even though it’s not a novel about Spitfires, or if so, only adjacently. I should also mention the physical shape and feel and weight of the book: it seems to me to have classic proportions, perhaps by design, perhaps by accident. It is good to hold.

Before I get too sentimental, let me add that it’s also a snip at £12.99. One of the less-advertised wonders of our age is the way that the prices of hardback books, in a time of alleged recession in the book-buying habit, and under the much spoken-of threat of downloads and e-books, remain competitive. Almost exactly twenty-three years ago, my novel The Quiet Woman came out in hardback from Bloomsbury. In 1990 it was priced at £13.99 and contained half the number of pages of my new one. The hardback of The Prestige (Touchstone, five years later) was priced at £15.99. And some books not only keep their prices but gain in value as the years go by. That hardback of The Prestige now usually sells secondhand for hundreds of pounds – there’s a copy on AbeBooks at present, going for £950. I wish I had kept a few more of them.

One final word of gratitude, this time to Charlie Panayiotou at Gollancz, charged with the responsibility of transferring my proof corrections to the final copy. In the manuscript I had devised an eccentric scheme of chapter headings and subheads, which someone in Orion’s production department rather sternly corrected. I appealed to Charlie to restore my original, and now I have seen the book I realize he did, and exactly so. Thanks, Charlie!

As part of the annual Charing Cross Road Fest, my new novel The Adjacent will be launched at Blackwell’s Bookshop (100 Charing Cross Road) on Saturday 22nd June. I will be in conversation with Simon Ings, from 12:30 lunchtime. Tickets are free, but have to be booked in advance.

Simon is the editor of Arc, the digital magazine about the future, and is the author of Dead Water, one of the novels inexplicably neglected by last year’s Clarke Award judges. He is currently writing a science fiction novel about Hampshire, a place he hates. His other books are soon to be reissued by Gollancz.

Click here for full details of the Blackwell’s event. (For “Afghanistan” read “Anatolia”, incidentally. Not my error, and not Blackwell’s, either.) Tickets can be ordered from: events.london@blackwell.co.uk

While I am on this sort of subject, two weeks earlier, on Saturday 8th June, I will be addressing the British Humanist Association annual conference, at the Hilton Leeds City Hotel, Neville Street, in Leeds. As this is a conference you would have to join in advance – places are still available, and may be booked here.

Here are links to some recent blog entries on this site:

12 May 2013
Bomber Command memorial – the most recent entry.
‘In June 2012 a permanent memorial was created to the RAF Bomber Command campaign of the second world war. The memorial is to all lives lost during the war, notably the estimated 600,000 civilians and non-combatants killed on the ground by the bombing, but it is also, at last, a memorial to the young men, all volunteers, who served as aircrew in the air force. Theirs was one of the most dangerous jobs of the war.’

16 December 2012
Lionel Asbo by Martin Amis – a review of this novel.
‘Bad books are usually written by incompetents, so are bad in uninteresting ways, but occasionally a real corker comes along: a poor or careless or contemptible piece of work by a highly rated author.’

9 December 2012
Robert McCrum: “cockroach in the world of books” – a response to one of McCrum’s Guardian essays.
‘McCrum’s weakness is that he will not acknowledge his blind spots. Genre fiction, or what he thinks is genre fiction, is the prime example. He abdicates himself from addressing the problem by assuming that genre fiction abides by rules and conventions that general fiction does not, and that it has an orthodoxy he neither understands nor wishes to learn about. He thinks it is a specialist form that can only be dealt with by an editor with specialist expertise.’

27 October 2012
Communion Town by Sam Thompson – one of the best novels of 2012.
‘This is not a review of a novel so much as a recommendation of one – the best new novel I have read this year is Sam Thompson’s Communion Town. It is a first novel of impressive skill and imaginative flair, ambitiously structured and beautifully written, described by the publisher as a city in ten chapters, which in fact sums it up admirably. The central city, which might be London, or Boston, or Tel Aviv, or Melbourne, grows slowly into vivid life as you read the stories of the various people who live there.’

28 March 2012
Hull 0, Scunthorpe 3 – a polemical essay about the ineptly managed 2012 Clarke Award shortlist.
‘It seems to me that 2011 was a poor year for science fiction. Of the sixty books submitted by publishers, only a tiny handful were suitable for awards. The brutal reality is that there were fewer than the six needed for the Clarke shortlist.’

2 January 2012
The Inner Man – The Life of J. G. Ballard by John Baxter – a review of this unreliable biography of the great writer.
‘Gossip is the main weakness of Baxter’s book, because he falls foul of the temptation to rely too heavily on the memories of living witnesses. From evidence I have seen elsewhere, much of this book appears to have been heavily influenced by long interviews with Michael Moorcock.’

We are now only a few weeks away from the release of my next novel The Adjacent (to be published by Gollancz on 20th June), so it’s time to mention a debt. The background for a section of the book came from the RAF bombing campaign against Germany in the Second World War. This is the second of my novels to deal with this difficult period of British history: The Separation (2002) described more directly the impact on the life of a young man who flew with Bomber Command in the early part of the war. The Adjacent does not go over similar ground, but it does touch on the same sensitive subject. 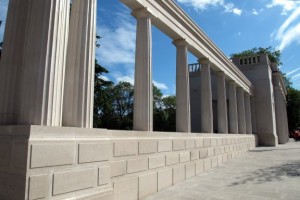 In June 2012 a permanent memorial was created to the RAF Bomber Command campaign of the second world war. The memorial is to all lives lost during the war, notably the estimated 600,000 civilians and non-combatants killed on the ground by the bombing, but it is also, at last, a memorial to the young men, all volunteers, who served as aircrew in the air force. Theirs was one of the most dangerous jobs of the war. 55,573 RAF men were killed in bombing raids during the war, and another 18,000 were wounded or taken prisoner – which was more than half the total number of crew involved (about 120,000). Serving in an RAF bomber gave a worse chance of non-survival than that of an infantry officer in the 1914-18 war. Bomber Command survivors and the families of many of the lost men have campaigned for years for the sacrifice of so many lives to be acknowledged. 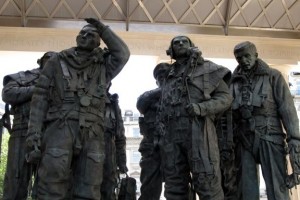 Winston Churchill, who through much of the war was an enthusiastic advocate of destroying German cities, and killing as many civilians as possible, changed his mind towards the end of the war, probably realizing belatedly how history might regard him. Under his orders, no Bomber Command campaign medal was ever struck, surviving career officers were demoted to their pre-war ranks, and most of the remaining civilian volunteers were demobilized and sent home as soon as possible. 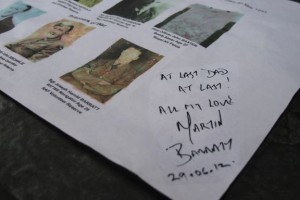 memorial is situated in Green Park, London, at the Hyde Park Corner end of Piccadilly. It contains some suitable statuary of an RAF crew, and several commemorative tablets explaining what was at stake for the ordinary people who were so terribly affected by this aspect of the war. I found it to be an unpretentious monument, and was moved by the many simple and heartfelt comments people had written on their cards and tributes.

Because none of my family or close friends were involved in RAF activities during WW2, and because I am a novelist and not an historian, I’ve always felt a bit uncomfortable with the idea of my taking a stand on the morality or otherwise of the bombing of Germany. However, I have been reading books about this subject ever since I was a teenager, invariably torn between horror of what happened and sympathy for those caught up in it.

I have long held that many of the books written by participants in WW2 are the literary equivalent of the outpouring of poetry that appeared in the First World War. In fact, relatively little good poetry was produced in 1939-45 (Daniel Swift’s recent book Bomber County, 2010, is the best existing account of what we have — reviewed by me here), but in the immediate postwar years, starting in the late 1940s but mostly from about 1950 onwards, there was a veritable flood of books containing war stories, war memoirs, war experiences: captives escaping from prisoner-of-war camps, agents parachuted behind enemy lines, bombers attacking dams in the Ruhr, nurses and firemen in the Blitz, gunners in the rear turret of Lancaster bombers, U-boat submariners in the North Atlantic, memoirs of generals, and so on. At first, during the 1950s, these books were produced by trade publishers as general titles, but in recent years those that are reprinted come from specialist military publishers, small presses or have been sponsored by the families. Many can be found in the Military History sections of large bookstores (which like many bookshop departments can be a bit of a misleading label), and of course the internet will locate most of them. They make up a neglected but unique vernacular history of that appalling war. None of them is a literary masterpiece, but like much of the poetry from the earlier war they are written with energy and a sense of total personal experience and commitment, they are moving, they contain material that is sometimes graphic or shocking or surprising, they are above all true in every sense of the word. Here are a few, but there are literally hundreds more:

A postscript. I visited the Bomber Command memorial at the end of June 2012, just two days after it had been officially opened by the Queen. Many of the floral tributes and cards were still fresh. I found the one from Martin Barratt (in the photograph above, dated the day before), and took a couple of pictures of it. The poignant little message struck me as sharing the same sense of ordinary decency and pain that I had encountered many times before in these books. I moved away, looking at the other tributes. When I returned to the place where Mr Barratt’s message had been left, I discovered that it was now missing. It had not been moved to one side, it had not fallen to the floor, there was not enough of a wind to have blown it away. I looked everywhere around, but someone must have removed it. I can’t imagine why.