To Victory Wood, near Whitstable in Kent, to visit the oaken bench and newly planted oak tree to commemorate the life and work of our friend, Rob Holdstock. Rob died unexpectedly at the end of 2009, leaving a gap in the lives of many people, still unfilled.

Victory Wood is a new plantation, situated between two existing areas of natural ancient woodland, Blean Wood and Ellenden Wood, and for the time being most of it is scrubland covered in wild flowers and grasses. It is a fine, high stretch of land. In time it will grow into a mature forest. 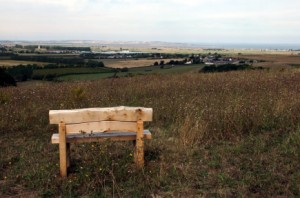 Rob Holdstock is commemorated in two ways: a wooden bench situated on a bluff of land overlooking the  Thames Estuary, with a distant view as far as Chatham shipyard to the west and Whitstable to the east. There is a motorway somewhere down there (well hidden), a railway line and out at sea there is a growing forest of a more modern kind: one of the largest marine wind-farms in Europe. And the tree itself is a sapling grown from an acorn of a 500-year-old oak standing in Windsor Great Park. 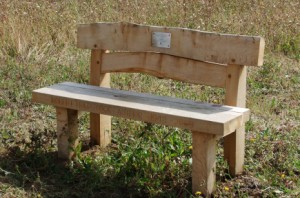 Today a small group of Rob’s friends and family strode along the paths and tracks to have a look at what is in place. Present were: Sarah Biggs, Rob’s partner of many years, and Rob’s younger brother Chris Holdstock — it was Sarah and Chris who did much of the planning and organizing with the Woodland Trust, getting permission to place the bench and to plant the sapling. Also present were Garry and Annette Kilworth, Roy Kettle and Kathleen Mitchell, Chris Evans, Nina Allan and myself.

It was a great and exhilarating walk in hot summer sunshine — at the end we staggered off to a local pub, dehydrated and covered in burrs, for a long and only slightly reflective late lunch.

It is a glorious tribute to a great man and a fine writer. There is a link above to the Woodland Trust’s unusually excellent info page about Victory Wood — they don’t (yet) mark Rob’s Oak as a special feature, but the day will doubtless come. The bench is located high on the ridge close to what is identified on the map as “Clay Hill viewpoint”; there is a commemorative metal plate, together with a few lines from one of Rob’s best poems. The oak (which is as yet barely two feet high) is further to the east, close to what will be the perimeter of the new wood. A permanent post identifies it. Both are undoubtedly hard to find without someone to guide you, but I hope to post the OS map references when they become available.** The whole area is well worth a visit. Now, afterwards, I am left with a strange mixed feeling of sadness and joy.