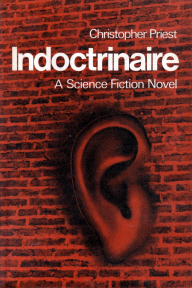 editions have included US hardback and paperback, as well as British paperback reprints: NEL (1971) and Pan (1979). Also in translation. No current UK or US edition.

Indoctrinaire was CP’s first novel, a leap into the unknown for both publisher and author. (Faber commissioned the book from an outline.) Although by no means pre-figuring what Priest would achieve with his later books, Indoctrinaire is not without its moments. It describes a future world where the Amazon forests have been cleared, the population has been decimated by a major war, and where the air itself contains deadly, mind-distorting compounds.

(In 1969 the Planalto District of the Mato Grosso in Brazil was a vast area of virgin rainforest — Indoctrinaire naughtily envisaged it as a post-industrial wasteland, denuded of trees and clad only in rough grasses. Early in 2011 a BBC camera crew flew over the Planalto District of the Mato Grosso, filming the extent of deforestation. Where there  had been a vast area of rainforest there is now scrubland: they grow biofuels and soya beans, and graze cattle for US hamburger chains.)