Just back from a week in France, where I was serving on the competition jury of a film festival in Tours, called Mauvais Genre. (‘Bad, Evil or Wicked Genre’: these were all non-mainstream films, some horror, some weirdness, some comedy, all broadly uncategorizable. The sort of films in fact that I love to discover.) This was the fourth festival jury I have been on, and watching movies all day can be surprisingly hard work. Enjoyable, though.

We watched nine movies in competition, plus two sets of shorts (courts métrages): eight live action films (worryingly, most of these depicted violent attacks on women: rape, torture and/or murder — can’t people think of stories any more?), and ten animated (these were of the highest quality, making a choice of winner really tricky). And any other out-of-competition films we cared to see as well.

The main competition turned out to be a bit of a problem, because as one film followed another it was difficult to pick out a clear winner. The competition opened with a Dutch film called Wolf, directed by Jim Taihuttu: a long and exceedingly violent story in monochrome, about a young man just released from prison who tries to redeem himself through kick-boxing. For most of the rest of the festival I thought this would have to be the winner, because in spite of its sordid material it was professionally and expertly made, well written and performed with conviction … but for me it seemed to lack a quality that would lift it above the familiar round of on-screen beatings and deaths. The films that followed Wolf were unexciting: two ‘found footage’ horror films (unconvincing, unoriginal and not even good for a bit of fright), a German-made broad comedy set in a forest, an American comedy about casual burglars, a lightweight Swedish drama about mind control, a couple of lukewarm Asia Extreme films … nothing that was fresh or surprising or shocking or even written particularly well.

Then came the final entry, Der Samurai, a werewolf film from Germany. I confess the heart sank horribly at the thought – the title alone was enough to slow the pulse. But from the first frame the film looked quite unlike any werewolf film I had ever seen before. What followed was subtle, well acted, unusual, radical … it even had a subtext. The ‘samurai’ of the title was violent, unpredictable and frightening, but also oddly vulnerable. We on the jury gave thanks to Till Kleinert, director and writer, and with one dissension came to a quick choice of winner.

One morning I went to Instant Cine, an excellent DVD shop in the town, and with not much warning and no script I had to give an impromptu 3-minute recommendation of recent films I had seen. Here is the result:

The other people on the jury with me were three French actors: Yannick Solier, Sofia Manousha and Julien Courbey, and the ‘president’ of the jury was a porn-video actor called HPG (Hervé Pierre Gustave). 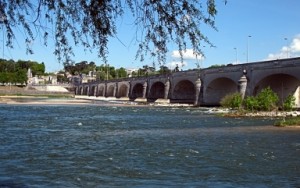 There were enough breaks between the films to explore the town, which has a modern commercial area and an attractive old centre, close to the Loire. The festival director was Garry Constant. He had been working on festival preparations all year. Everything went well.

Then to an overnight stay in Paris, where I gave a talk and Q&A at a bookshop called Librairie Charybde (129 rue de Charenton, 75012 Paris). I was daunted by the large crowd who had turned out. They let me do the gig in English, which was to me a vast relief, but even so brought on the embarrassed suspicion that a French writer doing the same thing in London would be expected not to speak French. Charybde is one of those small bookstores that immediately you enter imparts the feeling that every book there has been selected for a reason, that it is an implicitly recommended title. For the hundredth time in my life I wanted to up sticks and move permanently to Paris.

Then home, and the inevitable piled-up backlog of emails and bills.