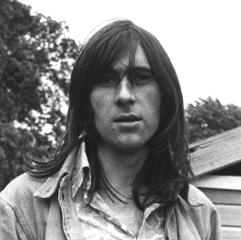 (Photo: Penny Grant.) Interview in the magazine Science Fiction Monthly. CP then 30-ish and should have known better. 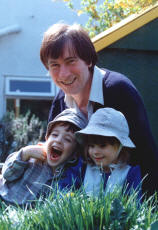 (Photo: Leigh Kennedy.) 1991, Hastings, East Sussex. Simon and Elizabeth were born in 1989. At this time, working on The Prestige. 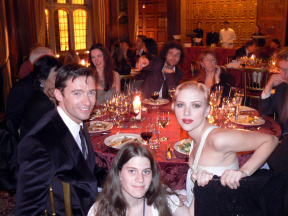 At the premiere dinner for the film of The Prestige, London, 2006. CP visible out of focus, background r. In foreground, centre, Elizabeth Priest. To each side of her, Hugh Jackman and Scarlett Johannson. Beyond Mr Jackman’s head is Rebecca Hall; also behind Mr Jackman, but not properly visible, Sir Michael Caine and Lady Shakira Caine. Director of the film, Christopher Nolan, is seated at far right, blurred and looking grumpy. Since this is the moment to drop names shamelessly we also met Michael Winner, Sir Peter Hall (father of Rebecca), Andy Serkis and F1-world-champion-to-be Jenson Button. Not present that evening, but also in the film, Christian Bale and David Bowie. We drank a lot of champagne, so exact memories are a bit unreliable.

(Photo: Elizabeth Priest.) Same occasion as above. The only meeting between CP and Christopher Nolan. 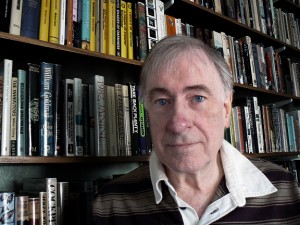 (Photo: Elizabeth Priest.) May 2011, at home with classic ruse of standing in front of a bookshelf. In this house it’s difficult to find much else.