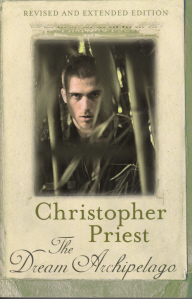 Revised and extended edition. First published in France in 1981 (Éditions Lattès), and subsequently in other countries, this book did not appear in English until 1999 (Earthlight; hardback and paperback). The Gollancz edition involves minor revisions to the first six stories, plus two new stories: ‘The Discharge’ and ‘The Trace of Him’.

CP’s short stories are relatively few and far between, but he has always used them as a way of exploring themes that run parallel to those in his novels. Prime among them are his stories of The Dream Archipelago. The thousands of islands that are the Archipelago, languishing in equatorial seas, make up a huge neutral zone in a world at war. As such, they represent a constant lure to young men and women on both sides of the conflict: conscientious objectors, remittance men, opportunists, adventurers, fugitives from military oppression. This is a book of sexual obsessions, moral ambiguities, neural abnormality.

There are four CP novels containing Dream Archipelago material: The Affirmation, The Islanders, The Adjacent (partial links) and The Gradual.