It was one of those phone calls that can change your life – or in this case that might even end it. One morning in September 1973 Brian Aldiss telephoned me to say that he had met one of the RAF people who were in charge of the Red Arrows aerobatic team. He had offered Brian a flight in the rear seat of one of the jets. Brian was up for it – he wanted to know if I would like to be up for it too.

While I suddenly sat down on the floor with a bump, Brian elaborated. He had this idea we could get Faber in on it (we were both published by Faber at the time), and make some kind of publicity stunt. He warmed to his theme: during every Red Arrows display two of the jets fly at low level on a high-speed collision course. They flip to avoid each other at the last moment. ‘I’ll be in one of them,’ Brian said, ‘and you can be in the other. Think of the publicity!’

I said, ‘Yes, and think of the publicity if we fail to avoid each other.’ But in the end I said in a faint voice, ‘OK, I’m in.’

In the days that followed I was obsessed. While Brian went away, presumably to make arrangements, I had a bit of thinking to do. Not complex or subtle thinking. Straightforward in fact, but quite big: there was no question that I was going to do it – who would miss a chance like that? On the other hand, well, you can imagine the dilemma. Life goes on in its safe old way … or you grab the possibility of a glorious death. Thoughts don’t get much bigger than that.

The following week, because of political turmoil in the Middle East, the Arab countries that supply the West with oil embargoed all sales. This had a drastic effect on life in Britain: fuel shortages, power cuts, the 3-day week and much else. One of the less publicized effects was the grounding of the Red Arrows. The publicity stunt for Brian and me was off. Six months later, when fuel supplies were back to normal and the Red Arrows were flying again, the idea was forgotten. Life, it seemed, was to go on in its safe old way. To this day I feel sad when I think of it, but since then I have taken an extra interest in the what the team does. My blog entry of 16th June, immediately below this, describes a visit to the Red Arrows base at RAF Scampton, in Lincolnshire, where I was able to watch the Red Arrows practising – in effect a full display above their own airfield. 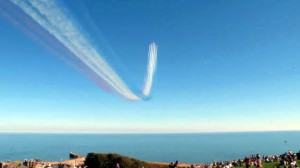 They came to Hastings last weekend, on 22nd July. That was the annual ‘Pirate Day’ in Hastings, when a vast number of otherwise apparently sane Hastings residents dress up like Johnny Depp, and wander the streets with cutlasses, striped T-shirts and three-cornered hats. I walked along to the vantage point of East Hill to watch the Red Arrows. It was the first real day of summer weather, so the conditions were perfect for an air display. The Red Arrows provide a curiously uplifting experience: both beautiful and frightening, artistic and disciplined. Their formation flying is so exact that when they bank the sun flashes off the wings simultaneously. Yet there are idiosyncratic touches too – in this display, apparently in an off-the-cuff moment, the formation of jets sky-wrote an unmistakable pirate’s hook across the blue.

I filmed the event, in the video above. The film has the many of the usual shortcomings of amateur footage, so you know what you are in for, but the whole display is there. The colours are lovely, and it’s not too jerky – promise! It was the first time I had tried to film anything, and because of the bright sunlight it was difficult to see the viewfinder. Those are my excuses. The film opens suddenly because in the nature of things the Red Arrows tend to appear without warning and at 500 m.p.h. In fact they arrived in Hastings on the dot of 5:30, as arranged, and flew exactly across the Old Town harbour, as expected. The display began immediately. I looked hard, but couldn’t spot Brian Aldiss.

More information about the Red Arrows from their website.