This is a public service entry:

When I wrote the blog entry immediately below this one I had been planning to write a review of Christopher Nolan’s new film, Interstellar, which I saw at the end of last week. That idea was hijacked by the sudden arrival of my copies of the Gollancz edition of A Dream of Wessex. Because I was thinking about Nolan I remembered I had always wanted to write about the similarities between that novel and his earlier film, Inception. So I did that instead. (See below.)

Interstellar is a problem, a long, poorly written and second-rate film with a wide popular appeal, so I briefly decided enough was enough. Other people, notably Abigail Nussbaum, have elegantly and convincingly demolished it. No point me adding to Nolan’s woes.

But yesterday there were several stories in the press, on the radio and all over the internet about the sound level of the new film. Many audiences have complained that the music and sound effects are too loud in Interstellar, while the dialogue is too low to be heard and followed. There were stories of people demanding their money back, and a theatre in Rochester NY putting up a sign saying that their sound equipment was not at fault: the film’s soundtrack had been recorded that way. Christopher Nolan himself came forward to confirm this, calling it ‘a carefully considered creative decision’, using the dialogue as a sound effect, to ‘emphasize how loud the surrounding noise is’.

The composer, Hans Zimmer (a highly regarded film composer, and rightly so), is himself totally unapologetic, and says so here. But as writer and director of the film, and someone who presumably oversaw the editing and sound mixing, Christopher Nolan has the greater responsibility.

Anyone knows the reality. The ‘surrounding noise’ of space is silent. Space is a vacuum – it is incapable of carrying sound. How Hans Zimmer’s loud music can be heard in space is a mystery only Nolan can explain.

(An earlier Nolan film, his adaptation of my novel The Prestige, had similar problems with music and dialogue recording. Although overall I admired the film, I have always been concerned with these two crucial weaknesses. Until Nolan came forward today to explain his creative decision, I had assumed the muttered dialogue was a mistake, a consequence of inexperience.)

Returning to Interstellar: By chance I am one of the few people who had no problem with the dialogue of this extremely long film. The version we saw was subtitled ‘for the hard of hearing’, so every word of the script was plain. I can therefore report that much of the dialogue creatively hidden from the audience is similar to the short extract above, and the rest is … not exactly Shakespearean pentameters.

Nolan clearly uses dialogue as a sort of fill-in noise. He calls it a sound effect. For him, words are something he has to get the actors to come out with while they’re performing set-pieces or going through spectacular scenes.

This was particularly true of Inception, which had one of the worst-written scripts I have come across. I winced at its clumsiness several times while watching it – a later look at the shooting script confirmed the clodhopper style was not my imagination. (Christopher Nolan was credited as writer.) Interstellar came from a different source: it was originally written solo by Jonah Nolan for a planned film by Steven Spielberg – that original script was very different from the finished film. Jonah’s original can be read on the internet, where there are several discussion pages about the many differences between the two. As Christopher Nolan is credited as co-author of the final screenplay, we assume that he was responsible for the changes when he took over the project from Spielberg. He has said so himself.

Dialogue is crucial to film: the words given to actors to deliver humanize the story, make it comprehensible to the audience, create characters with whom we can sympathize or at least understand. Nolan’s argument that dialogue is just another sound effect is weak and unconvincing, and is of course an evasion of something much more serious. If the dialogue he has written consists of people mumbling to themselves, or shouting about retro-thrusters over the noise in space, then maybe he is writing the wrong kind of dialogue in the wrong kind of film.

Here is the Gollancz paperback of A Dream of Wessex, just released. The novel has been unavailable for several years, so I’m pleased to see it in this attractive stripe. For those who are interested in such things, it was first published as a Faber hardcover in the UK in 1977, which makes it getting on for forty years old. I imagine some aspects of it will now seem dated, but maybe that’s how it should be.

Wessex is not so dated, though, that some people were prevented from pointing out the similarities between this book and Christopher Nolan’s film Inception, released in 2010, a mere thirty-three years later. Both deal with the exploration of the dream state, and how that impinges on reality, or our perception of reality. I say straight away that I did not notice anything more than minor coincidences myself, and never mentioned the few bits I registered. Anyway I would be reluctant to make what might seem an allegation that Christopher Nolan had nicked some of my material. He and I have a known professional relationship, and I assume he is familiar with most of my books, even if he hasn’t read them closely.

The first time someone pointed out the several resemblances between the two I was surprised that I had missed so many of them, but after more people had gently explained them to me I began to see.

Like many people who went to the film, I had been dazzled by its surface, the astonishing CGI effects and photographic trickery. I found the plot more or less incomprehensible, though – it was a kind of mix of James Bond antics (buildings collapsing, explosions, chases, guns, snowmobiles), and men in business suits mouthing lines about reality and dreams, and finishing each other’s explanatory sentences. I gave up trying to follow the plot after this pungent exchange:

So how did we end up at this restaurant? / We came here from … / How did we get here? Where are we? / Oh my God. We’re dreaming. / Stay calm. We’re actually asleep in the workshop. (Pp. 66 – 67 of the shooting script, published by Insight Editions.)

The urge to describe and explain the plot through dialogue is incidentally a similar feature of Nolan’s current release, Interstellar. In this three-hour spaceship adventure there are extended dialogues between astronauts in spacesuits, risibly explaining orbits, trajectories, relativity and wormholes to each other, finishing each other’s explanatory sentences, and drawing primary-school level graphics to convince themselves the plot is going OK. This was so nakedly aimed at the assumed ignorance of the audience that it was embarrassing. As soon as a film engages in trying to meet the imagined comprehension of an audience, it loses itself. Consider instead the success of Jonathan Glazer’s Under the Skin (2013), which showed everything and explained nothing.

But back to Inception. Some of it was genuinely beautiful and mysterious to watch: the city of Paris inverting, trick mirrors along the banks of the Seine, a super-slo-mo shot of a van plunging into an icy river from a bridge, a ruined city slowly collapsing into the sea. These are all Nolan’s creation, or that of the CGI studios who developed the images for him.

Some of it, I saw belatedly, did have an uncanny likeness to my novel. There is, for instance a scene below ground, in fact in the basement of Yusuf’s pharmacy, in which a large number of people are shown to be sharing a continuous dream, one from which it is impossible or dangerous to withdraw. This might be part of a dream within a dream! The situation exactly matches the MacGuffin in A Dream of Wessex, which is about a scientific experiment in which a large number of people go below ground, and create a pooled dreamworld, one which is so plausible that it becomes hard for them to distinguish it from reality. Withdrawal from it is difficult and dangerous. And both film and book deal with the risks attached to creating a second or third level of dream, within the dream.

I’m nearly forty years away from the writing of A Dream of Wessex, and looking at it now I find it has some surprises for me. I make no claim for it. It is what it is, and in my own writing chronology it was a tentative first step towards the material in The Affirmation, which followed it. Wessex is a sort of transition from what I wrote in the early days, to the fiction I wrote later. (Some people, not I, might argue this was a progress from futuristic or ‘science’ fiction to a more sophisticated ‘speculative’ fiction, which is, interestingly, the exact distinction Christopher Nolan makes in the Introduction to the screenplay of Interstellar, also published by Faber. His film about astronauts and spaceships and alien planets is, he says, speculative fiction not science fiction. It lacks futurism, he claims, and is true to the contemporary world.)

But I’ll say this of Wessex: it has the quality of a direct narrative, where the plot is revealed through the characters: their actions, their relationships, their discoveries. They don’t sit around discussing the plot, and helping each other explain complicated ideas – they get on with the story. Maybe that’s how we did it in the old days … 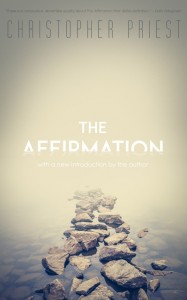 Here is the cover image of a brand-new US paperback of my 1981 novel, The Affirmation. This is scheduled to be published in January 2015 by the superb American indie publisher Valancourt, with a new introduction written by myself.

The Affirmation has been effectively unobtainable in the USA almost from the moment it was published in hardcover by Scribner. Their edition lacked a certain feeling of conviction and the book received mediocre reviews. I have  memories of coming across three rather battered copies a few weeks after publication, on sale in a branch of Crown Books in Houston — they looked sad and unloved, and I was tempted to buy them myself to put them out of their misery. A year later, when I was back in Houston, I found the same three copies still on sale in Crown Books, but now they were priced at 5¢ each and still had no buyers. It is moments like that which remind writers of their lowly place in the universe. The Affirmation has never had a paperback edition in America until now.

It is not the best-known of my novels, but it has always had a remarkable effect on a significant number of readers. Although it was written in what now seems a distant part of my life, I still regard it as my ‘key’ novel. I go into this in more detail in the introduction.

An odd footnote: Nielsen’s Bookdata no longer lists the Scribner edition of The Affirmation, but a search in the database for the ISBN (which without fear of contradiction or error I can state is 0-684-16957-6) reveals a book called The Affirmation by one Oliver Trager. I generously assume this is not copyright theft, but what Martin Rowson the cartoonist calls (and sometimes draws) a fur cup. I assure Nielsen’s and Mr Trager that I really am the true author of the book, and I have numerous different editions to prove it. I hope that enough readers in the US will now discover the book for themselves.

Valancourt’s interesting website may be viewed here. And an essay I wrote about three years ago, concerning the maddening reviews The Affirmation received, can be found on this website.