It is now almost sixteen years since the release of the film of The Prestige. A lot can change in a decade and a half, and it’s fair to say the world we live in now is radically different from what we knew in the mid-noughties. In a more particular sense the young director of The Prestige, Christopher Nolan, who was then at the start of his career, has had a string of international successes and is now widely regarded as a top film-maker. Most of the main actors have grown in fame and stardom since they made the film. It was the first of my novels to be filmed, and remains the only one. (So far.) It doesn’t seem so long ago to me. 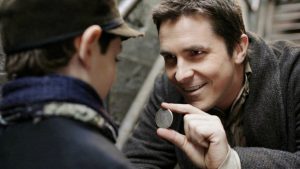 The Glasgow Film Theatre is running a short season of Nolan films on various dates during July, starting on 3rd July with a late-afternoon 35mm screening of The Prestige. On 5th July I will be at the GFT to introduce a second screening at 8.00pm, followed by a short Q&A. Full details here. The GFT is in Rose Street, Glasgow.

The Prestige still looks like a pretty good film to me, possibly Nolan’s best so far, a view which seems to be shared by an increasing number of people. I haven’t seen it on the big screen since 2008, but from sampling it on the DVD and streaming platforms it doesn’t look dated. (The last theatrical screening I saw was in Russia. Their version had the entertaining phenomenon of Michael Caine unconvincingly dubbed into guttural Russian.) I seem to be in a minority of book writers because I don’t complain about the way the film has corrupted or betrayed or misunderstood my brilliant original. On the contrary, the film of The Prestige has always seemed like an intelligent and well thought out adaptation, different in many details from the book, but achieving the same sort of effect.