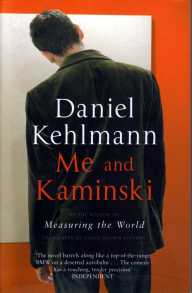 Me and Kaminski was first published in Germany in 2003; it was not translated into English until 2008, and this is the paperback edition. Kehlmann is admirably going about proving that Germans have a light and infectious sense of humour, thus overturning the usual lazy British generalizations about Germans. This is not slipstream in the way that Fame (below) was slip, but it has much the same unexpected quality to its writing. The story, such as it is, deals with the attempts of Sebastian Zöllner, a young art critic (who is cunning and determined, but pretty hopeless on, er, art and almost everything else), to meet and interview and eventually write a biography of an equally cunning but famous and eccentric elderly painter called Manuel Kaminski. Up against it from the start, Zöllner, who is rather like a character from a Kingsley Amis novel, becomes increasingly ruthless and more and more unlikely to get his story. Part social comedy, part road novel, Me and Kaminski is not a great or serious work of literature, but it is endlessly entertaining, well written and in its own way highly original. Increasingly, it is ‘foreign language’ writers like Kehlmann, Roberto Bolaño and Emmanuel Carrère who are bringing home the truth, until now apparent to many people who care about serious fiction, but not alas to everyone, that English-language literary drudges like Ian McEwan, Hanif Kureishi, Pat Barker and Julian Barnes have been creatively dead for about three decades.