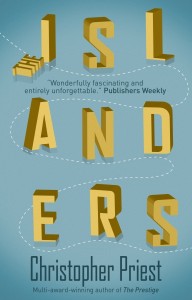 First of all, here is the extremely attractive cover illustration for my latest-but-one novel, The Islanders, which will be published in the USA in April 2014. It is coming out in trade paperback at the same time as The Adjacent, which is being published in hardcover. I don’t know who told them that I always prefer typographical covers, but they’ve got it right as far as I am concerned.

Speaking of The Islanders, it’s been a long time since I saw any copies of the Gollancz paperback on sale in bookshops here. I gave up patrolling bookstores decades ago, prowling around to check what my publishers might be up to (or not, as the case may be). For writers, it’s a bit of no-win situation: if the book’s not on sale you wonder why it has not been stocked, but if it is sitting there on the shelf you wonder unfairly: why can’t they sell it? Not much joy in either of those. But I am a regular visitor to bookstores and I can’t help noticing if that important if slightly narrow space between the titles by T. Pratchett and R. Rankin remains unfilled. I generally hope for the best and carry on. However, Amazon.co.uk has at present no copies of the Gollancz paperback of The Islanders on sale, even though according to my editor at VG, they still have many copies in the warehouse. The only copies you can buy now through Amazon are either secondhand copies, or pricey marked-up ones from specialist dealers … or, of course, the Kindle edition.

While I grumbled about this, Amazon suddenly and inexplicably announced that The Islanders was once again available in HARDBACK! What is going on? Where have those copies come from? I was given to understand that the hardback was long out of print.

Answers have come there none. But if you have been trying to get hold of one of Gollancz’s attractively printed hardbacks, now’s your chance. I suspect the situation is likely to change without warning. Click here soon!