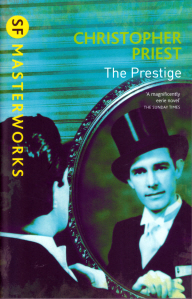 The Prestige was filmed in 2006 by Warner Bros, directed by Christopher Nolan. It starred Christian Bale, Hugh Jackman and Scarlett Johannson. It reached #1 US box office, and was nominated for two Academy Awards.

As a book, The Prestige is one of Priest’s most acclaimed novels, being winner of both the World Fantasy Award and the James Tait Black Memorial Prize for Fiction (and shortlisted for three other awards). It has been in print ever since its first release, and has been translated into 23 languages. The film and the novel are broadly similar in outline but contain many differences, notably the ending, which many in the audience saw coming in the film,  but never in the novel.

A story of secrecy, curiosity and concealment, The Prestige is largely set in the smoke-and-mirrors world of Victorian music halls. Two stage illusionists engage in a bitter and deadly feud — the effects are still being felt by their families a hundred years later. Both men are driven to the extremes by the mystery of an amazing stage illusion they both perform.

The novel itself is constructed like a stage illusion: because of misdirection, nothing can be taken for granted — the straightforward narrative tells no lies, but revelations and unexpected twists occur at regular intervals. The secret of the magic is not kept  from the reader, because for the antagonists the real mystery lies deeper. Both men have more to hide than the mere workings of a trick.