In 1962 I was working in the City of London as the world’s worst trainee accountant. I hated the job, and they hated me too. They should have fired me, but they couldn’t because we had signed articles (a binding agreement for five years) that meant I could not leave and they could not fire me. (In 1965, the articles came to an end. They fired me.)

However, early in 1962 I was still there, and a teenage passion for science fiction had suddenly made life more interesting. One of the writers I most admired was Brian Aldiss, who had written several intriguingly unusual short stories, and two or three novels which I thought were pretty good. One of them, Non-Stop, a brilliantly mad and inventive subversion of a trad American science fiction theme (a big spaceship lost in space), had so enthralled me that it had convinced me I should one day like to become a writer too. It took a while to get there, but I never forgot the epiphany of realizing that writing was a human activity that was achievable. Brian Aldiss had also published an anthology called Penguin Science Fiction. (Published by Penguin Books, and full of science fiction, of course.) In the short biography of the editor it mentioned that Mr Aldiss was the president of something called the British Science Fiction Association — I imagined it to be a place where people with mighty minds and vivid imaginations would meet in conclave.

One evening I read a review in the London Evening News of a new novel by John Christopher called The World in Winter. The review gave extravagant praise to this book, but ruined everything by going on to complain that the novel had been marketed as science fiction, which the idiot reviewer described (but not in so many words) as a despicable commercial genre that of course no one could take seriously. This is a customary put-down of science fiction (still in use, no sign yet of its fall from usefulness) deployed by inexperienced reviewers who are trying to impress readers they assume to be even more stupid than themselves. Although I was only 18 I had already spotted this type. I felt weary contempt for whoever it was. Didn’t know what to say.

Not Brian Aldiss, who had also seen this annoying review, and as president of the BSFA wrote a witty letter of complaint to the newspaper, pointing out what a dullard their reviewer was. They published his address at the end of his letter.

I therefore wrote to Mr Aldiss, complimented him on his letter, and timidly asked if it was possible for nonentities like me to join the BSFA, or was it only for writers? Brian Aldiss responded at once, complimented me on having the right attitude, said that of course the BSFA was open to anyone (and passed on the contact address) and went on to urge me to attend the annual science fiction convention, where he would love to meet me and have a good conversation.

It was a marvellous letter for an insecure and bookish teenager to receive. I treasured it and kept it, and to this day it remains the first item in my huge archive of correspondence.

In fact, I was too hard up and too shy to go the SF convention, and did not meet Brian Aldiss in person until about 1965. Then, when he found out my name, he said, ‘I remember you — you wrote me that intelligent letter! Come and have a drink!’ It was the first moment of a friendship that was to last, with the usual ups and downs of any friendship between two difficult men, for more than half a century. 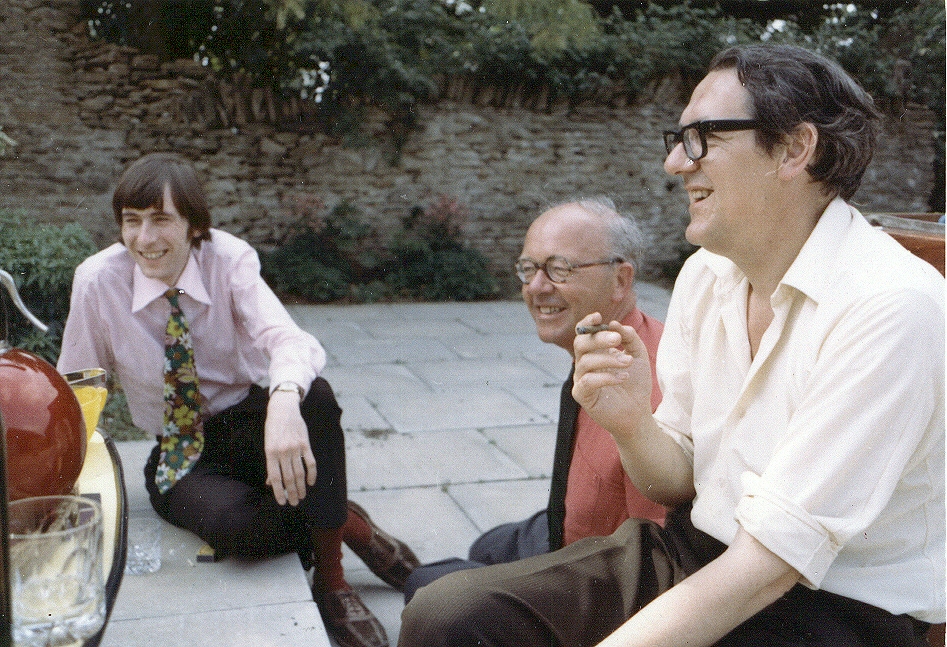 This is a photograph taken in June 1970, by Margaret, Brian Aldiss’s second wife. Brian had generously invited me down to their house in Oxfordshire to celebrate the publication of my first novel Indoctrinaire. Also there was Charles Monteith, who was not only my editor at the publishers Faber & Faber, he was Brian’s too. He had been responsible for buying and publishing all the early Aldiss books, including those short stories I had admired so much, and the fabulous bravura of Non-Stop.

Today I learned that Brian had died, one day after his 92nd birthday. When someone has had such a long life, living to a great age, the end will not come as a surprise to those around, but none the less this news came as a profound and upsetting shock. I was privileged to write a long obituary for the Guardian, but a formal article is not the appropriate place to express fondness and gratitude for everything. His work shines out as an example to us all, a standard to strive to equal. His professionalism was legendary. His conversation was something to stay up all night for, and his sense of fun was marvellous. He is irreplaceable.

Since the beginning of April I have been working on a new novel. It has occupied almost all my interest and most of my time since then, so I have rather neglected writing anything here. The novel will be titled An American Story, and I hope and plan to deliver it in the next few weeks.

(It did have a “The” title for a while, but I began to think it was time to put that to rest for a while. Also put aside, perhaps temporarily, perhaps forever, is the Dream Archipelago. I have not lost interest in either of these signature marks, but they were indeed starting to feel like signature marks. I hate being pigeonholed, so An American Story will be something new and different.)

Something old: my most recently published novel, The Gradual, is now out in paperback in both the USA and the UK (Titan and Gollancz respectively), and I have a new short story about to appear in an anthology called 2084, from the indie publisher Unsung Stories. This book is a celebration of George Orwell’s best known novel, a hundred years on. Although I rate Nineteen Eighty-Four as a genuine classic, I believe Orwell’s most important work, at least in terms of the great influence he has had on those of us who follow him, lies in his non-fiction, notably his social and political essays. My story is therefore called “Shooting an Episode”.

My small, specialist literary agency (est. 1981) has recently been given a refreshing boost of new legitimacy in that I am now representing the Belfast-based writer, Sam Thompson. Sam is the real thing: a new and thrilling literary writer of genuine and original talent. His first book Communion Town was a brilliant and radical exegesis of ten modes of fantastic fiction. (The subtitle was: A City in Ten Chapters.) It was longlisted for the Man Booker Prize in its year but went no further. As is often the case its fascination with the fantastic reduced its chances of being treated as a serious work. (Familiar problem.) It should have walked into the Booker shortlist, and been a strong contender for the main prize — but that was not to be. One day it will be recognized for what it was, and the Booker judges for what they were. Anyway, Sam has now produced a second novel called Jott, and we have sold it to John Murray in the UK. It will be out in the summer of next year.

Last month I recorded a 35-minute unedited interview with BBC Radio Scotland, in their Good Morning, Scotland strand. No doubt most people missed this (not everyone), but you can catch up with it here. Warning: it starts suddenly, and there’s a huge photo to get past.

Nina and I will be joint guests of honour at Fantasticon in Copenhagen, 2nd-3rd September.

I will be at the Gollancz Festival, held in Foyles Bookshop, Charing Cross Road, London, on 4th November. Tickets and details here.

On 13th November I shall be doing a reading and a Q&A at Glasgow University, in their series of Creative Conversations.

And on 25th November I shall be at Anglia Ruskin University in Cambridge, giving a talk at the conference Weird Fiction and J. G. Ballard. (I don’t appear to have a link for that yet.)