New Perspectives, the exhibition mounted by Beaford Arts of

photographs by James Ravilious and others, opened yesterday. (See entry below.) It runs until 12th November. The exhibition will eventually tour, displaying in several of the villages and towns which are the actual locations, but this opening is at the Goodwin Gallery, Petroc Brannams Campus, Barnstaple.

It’s a rare opportunity to see twenty-five of James Ravilious’s extraordinary black-and-white images of North Devon, beautifully printed, mounted and displayed. The exhibition celebrates the fiftieth anniversary of Beaford Arts, which holds the Ravilious archive. It was curated and organized by Caroline Preston, who with Lizzie Grant and Martyn Warren also curated the open submissions.

Nina and I went to the private view yesterday, happily mingling with the other amateur photographers whose contemporary pictures were shown alongside Ravilious’s originals, most of them from thirty or forty years ago. 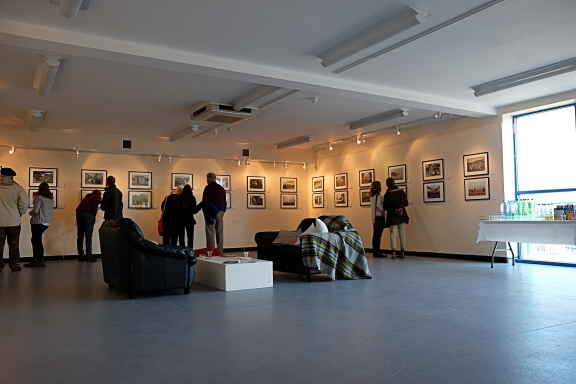