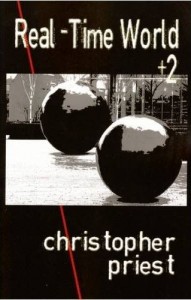 This is a paperback re-issue of Christopher Priest’s first short story collection, Real-Time World. Originally a hardback from NEL in 1974, the book has been more or less unavailable ever since. A GrimGrin hardback was published in 2008; the new paperback has the same stories, PLUS 2 others not included before. Here’s what amazon.co.uk said about the hardback:

“These are the early Priest sf stories that made print in various magazines (the companion volume, Ersatz Wines, also from GrimGrin Studio, features mostly previously unpublished stories). Some are admittedly the work of a writer finding his voice and place in the world of late sixties-early seventies British New Wave sf, but most are important in allowing devotees an insight into the emergent career of one of Britain’s most gifted and original writers. The eponymous story is an important one in the Priest canon, nodding a head as it does to future projects (including the novel Inverted World), but for me, the absolute stone cold New Wave classic in the book is CP’s first published story, “The Run”, a gripping, blunt tale of a future Prime Minister’s response to goading from unemployed, unemployable masses as a massive crisis looms on the horizon. Terse, ambiguous, with a character simultaneously unsympathetic and recognisably human, shot through with the ominous presence of impending nuclear doom, this is stunning stuff. There are, of course, other good stories in this book, but for my money, “The Run” (which CP describes as ‘pristine melodrama’) is worth the price of admission alone, despite its 10-12 page length. In my opinion (and I wrote the book 100 Must Read Science Fiction Novels) it is one of the great 1960s British sf stories, even if it does not present the author’s mature style. Just brilliant. To sum up, if you are interested in classic British literary sf that sits alongside the work of Moorcock, M. John Harrison, Aldiss and Ballard from this period, then you must buy this book, as it is essential.” – Steve Andrews

As well as “The Run”, the book includes the much-anthologized stories “Fire Storm” and “Real-Time World”. The new stories are “Nothing Like the Sun” (1970) and “The Invisible Men” (1974).