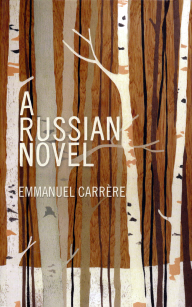 Carrère is one of the best current writers in France. This book, allegedly a novel, but in fact a work of fiction based (apparently) on a great deal of personal experience, is one of the most unusual I have read in a long time.

Like the new novel by Julian Barnes (The Sense of an Ending) much of the book is given over to introspective grappling with feelings of love, loneliness, jealousy, passion, possessiveness, frustration, and all the other experiences around sexual life. Unlike the feeble offering from Mr Barnes, A Russian Novel is a radical, daring and honest work of literature.