In today’s Guardian G2 supplement, Chris Hall has an article about the opening of the J. G. Ballard archive at the British Library. Fascinating stuff. (For link, see below.) Part of Hall’s argument is that there is little insight in the archive into the man himself: Ballard liked to cover his tracks.

My own archive (which is to say, the pile of dusty old boxes in the loft) contains some Ballard material that does actually afford a glimpse into the great man’s nature. It dates back forty-five years. The background to it is this:

In 1966 I came across a remaindered copy of a book by William Bradford Huie called The Hiroshima Pilot. This was an account of the life of Claude Eatherly, who claimed (falsely) that he was the pilot of the Superfortress that had dropped the atom bomb on Hiroshima. He later became a kind of symbol of collective guilt for what the West had done to an undefended city. The book explained a few fairly obscure references to Eatherly that had appeared in some of Ballard’s short stories. As an admirer of Ballard’s work I read Huie’s book immediately, and with immense interest. I wrote a long review of it, which after much intensive thought I called “Review of The Hiroshima Pilot”. (I failed to notice what should have been apparent, that The Hiroshima Pilot had been published in hardback two years earlier, and that the paperback edition had been published sufficiently far into the recent past, and without much success, to have made it to a remainder counter. I was late to the Eatherly mythos, but did not realize it until some time afterwards.)

Soon after I had completed the review I heard news that I found irresistibly interesting: J. G. Ballard was going to take over the editorship of Impulse magazine. I had sold two of my early stories to Impulse, and wanted and intended to sell more. The news that the writer I considered the best and most original of the day was going to be running it was a fabulous prospect. I submitted the review to him.

Mr Ballard returned it to me a few days later, with a handwritten note. The note is undated, but the postmark on the envelope he used is 7th June 1966. (There is more to learn about the envelope — below!) Here is what the note said:

Many thanks for giving me a look at the review — it struck me as first class, & I’m sorry I can’t use it — perhaps Mike Moorcock will take it, as it illuminates my own stories on the topic.

I’m sorry to have alerted you before finalising my arrangement over Impulse — I was very keen, & still am, to take over the magazine, and I assumed that as editor certain basic rules would be observed — however, on Saturday I found my so-called assistant editor discussing with the editor of another magazine the contents for my first two issues & about to send them to press, two issues of which I had been unable to see a single line of copy.

Perhaps in future we can work together.

Naturally, this was a disappointment to me. However, there was the consolation that he had obviously read the article, said he had liked it, and gave an interesting account of why he was returning it to me. But by this time I had already seen the envelope.

Presumably, by writing the note Ballard had intended to vent some of his irritation about the assistant editor (who was in fact the writer Keith Roberts, at that time not widely known but already the author of some excellent short stories, and a fairly good first novel). But instead of calming himself down, Ballard seemed to have made his annoyance greater, because after sealing up my manuscript and his note in the envelope, he scribbled a long afterthought on the outside. I had of course seen this as soon as I picked it up, but the excited handwriting and the unexplained context had not made it plain straight away what was going on. Here is what J. G. Ballard wrote on the back of the envelope:

I think in fact that “Migrant Angel” would be better — even “Migrant Angel of the Pre-Third”, which is what I suspect Eatherly really is — a messenger of the apocalypse come to warn us — not a bringer of guilt about WWII, but a dark angel from the coming holocaust — now no longer needed, although if China becomes a nuclear threat to world peace we may well see him again at the controls of the Enola Gay (or Straight Flush). I’m sorry your efforts were wasted — I’d hoped to illustrate your piece, both with a good line drawing with the review, and also with a half tone photograph of a B-29 or even Eatherly’s portrait in the inside front cover. However it was plain from my first meeting with Mike and Keith Roberts (an utterly 10th rate mediocrity, by the way), that I’d be up against certain difficulties, in particular Roberts, who would be working full-time for the firm, & forced to accept his appalling covers & general crudity & lack of imagination. However, you must try the review on Mike. He’ll be lucky to get it. I have told him about it.

I sent it to Michael Moorcock, but he too rejected it. The review was eventually published (under the title “Migrant Angel”) in the December 1966 edition of Vector. I always thought it would be worth keeping the note from J. G. Ballard, and also the envelope. They are very dusty now, but still intact.

Chris Hall’s article in the Guardian: Relics of a red-hot mind. 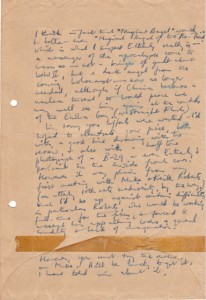