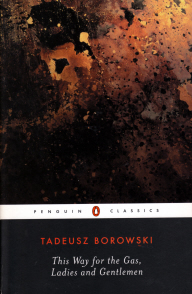 Borowski was born in 1922 in Zhitomir, in Ukraine, to Polish parents. His first book, a collection of poetry, was published in Warsaw in the winter of 1942. A few weeks later he was arrested and sent to Auschwitz. He survived the war, as did his fiancée, also incarcerated in the concentration camp. After the war Borowski joined the Communist Party and worked as a political journalist.

The stories in this book (fiction, but obviously and unquestionably based on direct experience) started appearing in 1946, and were published in two collections in the late 1940s. This Way for the Gas brings all his Auschwitz stories into one volume. Because of these stories, and his poetry, Borowski was almost immediately recognized in Poland as a major literary figure, although most of his output later was political journalism. He committed suicide in 1951, still only 29. It is at times a difficult and shocking book to read because of the content, but it is also undoubtedly a work of literature.

Like all great books it is not at all as your preconceptions might lead you to expect. Many of the events and descriptions come as a surprise, and because of our collective assumptions about life in an extermination camp some of it beggars belief, but Borowski was there. This Penguin edition appears to be the only English-language version presently available, and is published by the US branch of the company. It can be obtained through the internet.