This is a photograph of the Devonshire Inn, in Skipton Yorkshire, currently a branch of the JD Wetherspoon group: 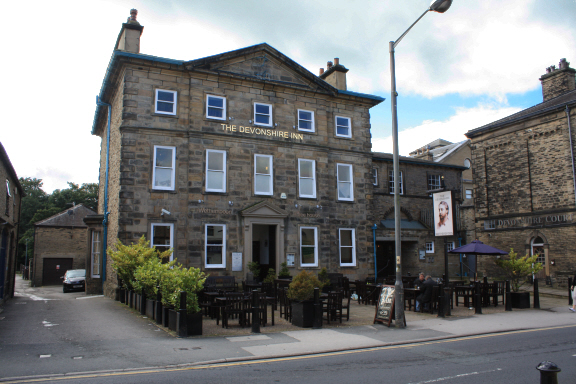 In 1893, though, the hotel was known as the Devonshire Arms, and set the scene for the opening pages of my novel The Space Machine, which is doubtless fondly remembered by all who read this journal. In the late nineteenth century the Devonshire Arms operated as a commercial hotel, catering in the main for travelling salesmen. My character in the book was one of them. I learned of the place in a book I was researching from (a portrait of the lives of commercial travellers in the 19th century — literary research leads one down many unexpected avenues), but in the late 1970s I discovered that the place still existed and I paid it a visit. It had by then become the plain Devonshire, and was being run as a pub. Here is the picture I took of it then: 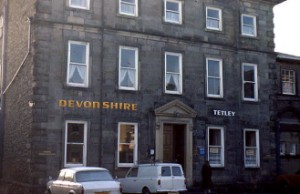 Earlier this month Nina and I were on holiday in Lancs/Yorks, and one evening ate dinner in the present Devonshire Inn. It was all OK. Being away from the desk (and the internet, and the long silences of others) provided a welcome break, and the break was on the whole rather OK. Although the Pennines and the Yorkshire Dales are a rainy part of the world we had several sunny days, but towards the end of the week the rain began to fall. There was a beck running in a steep-sided rocky gill at the back of our rented cottage, a shallow babbling brook of no harm or interest to anyone, but with the onset of the rains it deepened rapidly and on the day we left it was about three-quarters of the way to the top. As the north of England has subsequently suffered many hours of torrential rain, I don’t like to think what the harmless little brook must look like at the moment.

One day we drove across the glorious scenery of the Dales to the town of Harrogate, a dull place in which I have only a single interest and hold but one vivid memory.

In 1969 I was on a train heading towards Harrogate in the company of the science fiction writer Norman Spinrad, a striptease dancer called Terri and the author William Burroughs. Mr Burroughs spent most of the journey in the bar, knocking back one glass of whisky after another and telling me and the others that he was on something called the ‘drinking man’s diet’ — as he was of cadaverous and skeletal appearance I think it’s safe to say that it was a diet that worked. We were greeted on arrival in Harrogate by the publisher John Calder, who fussed and fawned over Mr Burroughs, dancing attentively on his needs, carrying his suitcase, etc. Spinrad, Terri and I followed on humbly behind. We were ushered into Mr Calder’s shining and splendid Jaguar, waiting at the station entrance: Mr Burroughs was helped into the front passenger seat and the rest of us crammed in behind. We drove away from the station portal, heading across the broad concourse. Mr Calder was in a sort of rapture: talking nineteen to the dozen to the great man in the front seat, sloshing the praise out unstoppably, regarding the famous author with loving eyes. However, in the back seat the three of us could hardly fail to notice that the Jaguar was heading towards a long flight of pedestrian steps. Our cries of warning went unheeded as Mr Calder blithely accelerated on. Within moments we were rattling and clattering down the steps, with loud and expensive-sounding scrapes and bangs coming from beneath the car. Halfway down the flight, the steps levelled out briefly before resuming. Here the beautiful Jaguar at last came to a halt, rocking to and fro on its chassis, balanced on the lip of the topmost step, just like the bus at the end of The Italian Job. We continued our journey to the hotel on foot.

My sole interest in Harrogate, a mere 43 years later, was to return to the station and: (a) try to find out if the car was still stuck there, (b) if not, to try to find the gouges and scrapes caused by the incident if they were still visible, and (c) if not even that, at least to find the flight of steps and take a souvenir photograph of them. However, Railtrack station refurbishment has put paid to this fragment of literary history, and there was no sign or trace of the Staircase of Beat Generation Chagrin. Slightly disappointed, I contented myself with other shots of the old spa town, including this one of a quiet, rain-wet passage that runs beside the Harrogate Baths:

From the other side of the island, here are some rocks. These are at Jenny Brown Point, in Lancashire: 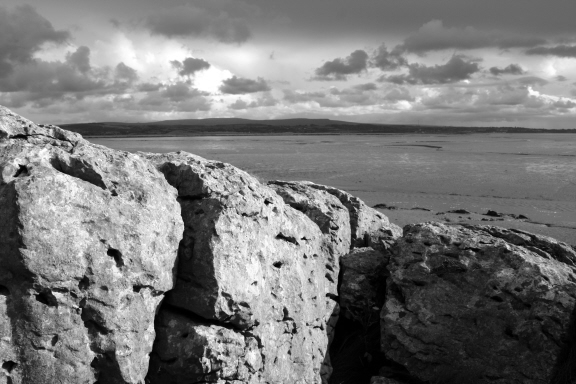 Low hills are visible on the horizon of the picture from Jenny Brown. This is the area of upland that lies just behind Morecambe Bay: the Forest of Bowland. Bowland is a huge tract of countryside, largely unknown by many people south of Watford. It is a varied landscape of unspoiled and undeveloped hills and valleys, much moorland, many small rivers and streams, hardly accessible by road and therefore a walkers’ paradise. The M6 motorway runs alongside it, but the road is mostly undetectable from more than about 100 yards away. It was amazing and reassuring to find such a large and beautiful area of undamaged landscape in modern Britain. In the wildest of bleak moorland we saw a sign to the local town: LANCASTER 6-> it said.

Here is a row of chairs, inside a pub, on the edge of Bowland: 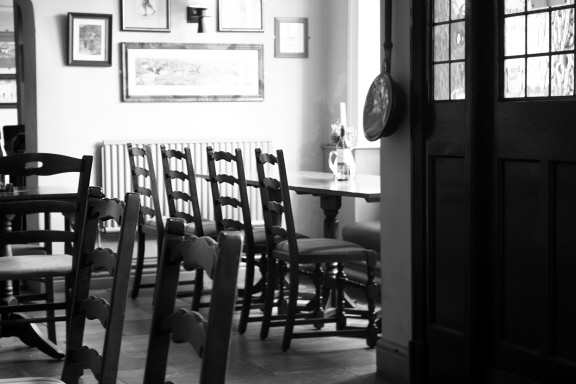 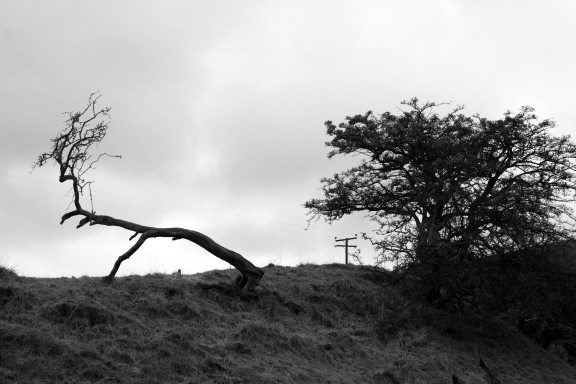 I was going to claim that we saw these windswept trees after we had reached the very summit of Pendle Hill (alt. 1,827 feet), but the truth is they were only halfway up. Well, part of the way up. Um, maybe not that far from the car park …

It was a bleak and windy day and the ground was sodden — in fact most of the path had water running along it. The day before I had twisted an ankle while walking in Skipton and it was still painful. I was distinctly nervous of this terrain of broken stones, muddy shallows and half-buried rocks. However, we went quite a long way up the hill, which dominates the landscape for miles around, and the views were breathtaking. On the way back down we passed a deep gully where an old house was hiding. Although it is not in fact typical of the Pendle scenery, there is to me something essentially English about the scale, the colours and the inescapable dampness of this simple cleft in the countryside: 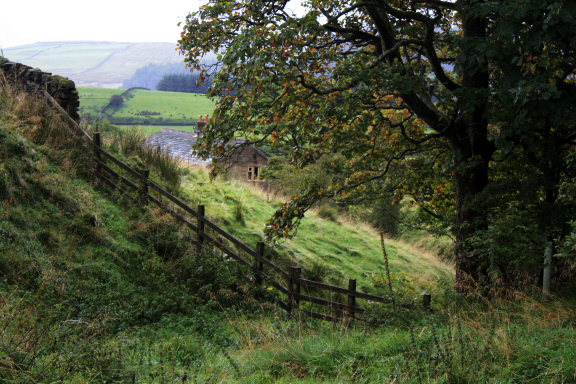