I went to see the new film Mortdecai (2015) with a feeling of duty to an old friend. (Kyril Bonfiglioli, who wrote the novels.) The reviews of the film have been almost universally awful, and after Nina and I saw the trailer last week I couldn’t help thinking it was going to be something to get through and keep quiet about afterwards.

Bon was such a great and long-lasting friend. He bought, published and even paid for my first story (eight guineas!), but that was not the sole basis for a friendship that lasted twenty years. In the mid 1970s he began writing the Charlie Mortdecai novels, completing three of them before the dread consequences of the demon booze caught up with him in 1985. He also wrote a non-Mortdecai novel, All the Tea in China (1978). After his death, an unfinished fourth Mortdecai novel was found in his papers – this was completed a few years later by Craig Brown. 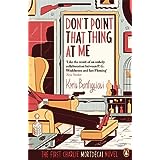 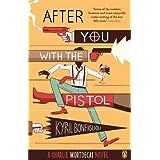 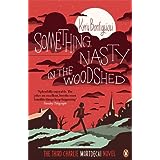 The Mortdecai books have recently been reprinted by Penguin Books. I read them as they came out in the 1970s – they struck me then as fabulous: fast-moving, extremely intelligent, funny, self-awarely xenophobic, ingeniously nasty, and full of bits you want to read out aloud to others. At the beginning of the first book (Don’t Point That Thing at Me) he wrote: “This is not an autobiographical novel: it is about some other portly, dissolute, immoral and middle-aged art dealer.” I would recommend the books without qualification if it were not for the fact they are now more than 30 years old, and the way we perceive the world has changed a bit since then. Well, all right, then: give them a go!

There is also a book called The Mortdecai ABC, by Margaret Bonfiglioli, published by Viking in 2001. This is a wonderful compendium, arranged in a kind of alphabetical order, of everything and a bit more about Bon. There is, for instance, a series of biographical sketches – a few sample headings include Car Crashes, Hidden Jokes, Food, Lies, Parrot, Waistband and Waistline, Tea. All his editorials from Science Fantasy are here, and every short story he ever wrote. Letters to his publishers. And letters to friends: a whole chapter reprints some of the correspondence between Bon and myself in the 1970s. In her Introduction, Margaret (Bon’s ex-wife) writes: “How did I happen to put together this book? Laughter began it.”

How sad it was to read the previews and reviews of David Koepp’s film Mortdecai. Peter Bradshaw in The Guardian wrote: “The poster is awful. The premise is awful. To be frank, quite a lot about it is awful: a middle-aged comedy caper of the kind not seen since Peter Sellers’s final outings as Clouseau and Fu Manchu.” Geoffrey Macnab in The Independent said: “an incredibly convoluted script involving a stolen Goya painting, random changes of location (we are whisked, for no particular reason, from London to Moscow to LA), too many gags involving vomit and rotting cheese, and some incredibly dull and dim-witted dialogue that would barely have passed muster in a bad British 1970s sitcom.” Things were no better in the USA, where box office takings were said to be some $50 millions below budget. Josh Slater-Williams in SoundOnSight wrote: “a cataclysmically unfunny, unbelievably tedious disaster of baffling misjudgments and multiple career lows that feels as long as Shoah, and only a little less harrowing.” The end of Johnny Depp’s career was doomily predicted by all and sundry.

Well, we went to see it anyway. I loved it. Nina loved it. We both laughed out loud several times, laughed quietly most of the time, and at very worst were agreeably amused for the rest. The audience enjoyed it too. It has a tremendous pace, scurrilousness, wit, a ridiculous heist, stupid violence, jokes about moustaches and penises and vomit and smelly cheese and foreigners. What more do you want?

Do try to catch the film while it is still around in theatres. And don’t miss the books!