This is a film famously upstaged by the stupid comments made by director Lars von Trier at a press conference during the Cannes Film Festival, which had been mounted to celebrate Kirsten Dunst’s award for Best Actress. (Von Trier himself had also been nominated for Palme d’Or as Best Director.) As I am finding with this brief notice, it seems impossible to talk about the film without mentioning the stupid remarks. This is a shame, because that storm in an eggcup seems to have distracted most people from the unusual qualities of the film itself, which are many and great. It is a serious, beautiful and imaginative film, written to a perfect pitch, full of psychological verities, a brilliantly observed dysfunctional family of adults, a brooding atmosphere, sensational acting, and photography to kill for. The writer was Lars von Trier himself. The actors are all excellent, but the two leads, Kirsten Dunst and Charlotte Gainsbourg, are thrilling to watch. The photography is by Manuel Alberto Claro. The atmosphere – well, the atmosphere is created by a combination of all these elements. 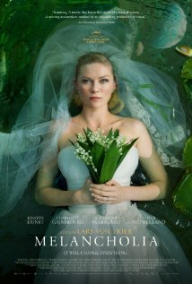 The opening is a series of strange and evocative tableaux vivants, isolated moments in a world where a globally catastrophic event is about to occur: the music is the overture to Wagner’s Tristan und Isolde, with its undertones of impending doom. The main part of the film is set in two chapters. In the first, Justine, we witness the marriage celebrations of Justine (Kirsten Dunst) to the son of her boss – to say that everything goes wrong would be an understatement, but the mise en scène is classically and sumptuously mounted, with terrific ensemble acting, a script full of moving insights, venomous remarks and perverse actions, and a sense that everything is indeed going to hell. The second part is called Claire (Charlotte Gainsbourg plays Claire, Justine’s sister), and is set in the immediate aftermath of the disastrous wedding. A great depression afflicts the remaining family, but in particular the two sisters, who are forever separated by a gulf of misunderstandings and old resentments. Meanwhile, the wandering rogue planet Melancholia is set on a collision course with our own planet. It moves ever nearer, wreaking psychological damage on the characters and, in the final few seconds of the film, terminal physical damage to the world.

Melancholia is a masterpiece, one of the finest science fiction films ever made, and if the film and arthouse worlds were not obsessively distracted by the director’s mad remarks it would be recognized as a genuine paradigm changer. It is an amazing and refreshing antidote to the ever-predictable Hollywood take on filmed science fiction, with its dull and over-familiar emphasis on action, resolute heroes, terse dialogue, knee-jerk gloom, clever technology and cute robots, and visual and CGI effects. The point most Hollywood films miss is that when disaster occurs it affects ordinary people, not presidents and heroes and Bruce Willis.

Melancholia uses the dramatic technique of microcosm: an unhappy and squabbling family surrounded by useless wealth, unable to comprehend or even momentarily adapt to the catastrophe that is about to hit them. There is no hope of reprieve, no heroics, no pseudoscience, no more special effects than absolutely necessary. Ten years from now Melancholia will be recognized as a classic: of cinema as well of cinematic science fiction, a highpoint in von Trier’s maverick but endlessly intriguing career.

Lars von Trier’s moving and sincere retraction (together with a wonderful burst of supportive outrage from Stellan Skarsgård, denouncing von Trier’s high-handed treatment by the Festival organizers), can be viewed here.