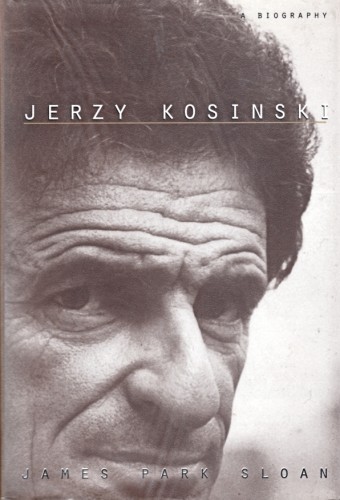 I have been reading this biography* of the Polish-American writer Jerzy Kosinski, a figure of deep ambiguity, a man of endless contradictions and apparent deceptiveness. He was a liar, a plagiarist, a shameless social climber, a hater and abuser of small dogs, a manipulator of women, a constant user of whores, an annoying player of unfunny and sometimes dangerous practical jokes. All of this was routinely denied by Kosinski, while most of his strange and dysfunctional acts were known and witnessed by many others. I knew none of it myself at the time, while not seriously doubting it when I became aware of what had been said. Rumours and accusations followed his career (intensifying after his death by suicide, a quarter of a century ago), with many people coming forward to claim that they had actually written his books for him. Some successful writers attract hostility and jealousy – Kosinski suffered these in spades. Everything is described in detail in the biography. Whatever the truth, for me Jerzy Kosinski was a novelist I found inspiring and influential.

I first came across his work in 1968, when his second novel, Steps, was published in the UK. I had never read another book like it: almost every page was a shock, a revelation. This was partly because of the period – Steps seemed to fit naturally into the social upheavals of the time – but also partly because I was a young and beginning writer, trying to write and sell my own first novel. I was seeking a voice, seeking encouragement, seeking almost everything. I was dissatisfied with the conventional narratives of the novel, knew that there were ways to try to break out into more adventurous methods, but I was also stricken with a kind of stage fright, a nervousness about my own limitations.

Incautiously reading Steps was for me like suddenly throwing open a door without knowing what might be on the other side of the steep wall that contained it – there was what seemed to be a burst of light, revelations, openings, possibilities, a view of scenery I had not suspected was there, or ever could be. Steps consists of many short narratives, told in an icily clear, unemphatic voice. It is all description, with hardly any dialogue. It is written in a detached narrative voice, first person, unemotional, worryingly dispassionate – but the steps in Steps are violent, abusive, sometimes disgusting, dangerous, always unexpected.

I have not re-read Steps since that first time, but its images still haunt me. I soon found Kosinski’s only other book available then: it was in fact his first novel, The Painted Bird, published a couple of years before Steps. The Painted Bird is a more linear narrative, but also

consists of a series of shocking scenes or events. As the Germans invade Poland in 1939, the middle-class parents of a young Jewish boy place him for safety with peasants in a remote part of the countryside. This arrangement quickly breaks down, and the boy endures the rest of the war alone and sleeping rough, fending for himself in a strange and hostile landscape. He witnesses, or endures, appalling events as the Holocaust goes on around him – what you read in Steps is mild when compared with The Painted Bird. Some of the material is so horrifying that it is almost literally impossible to read. Again, Kosinski’s narrative voice was hypnotically calm, but because of what I knew about the author’s personal background (from the brief author descriptions on the book jackets) I assumed it was an autobiographical novel. If so it was unlike anything of that sort I had ever read.

Most people made the same assumption. By the time his novels were published, Kosinski had social-climbed his way into the upper echelons of the New York literary establishment. A regular at dinner parties, he repeatedly told his horrifying anecdotes: parental abandonment, trying to pass as a non-Jew, the violence of ignorant peasants, mutilation by criminals and SS members, being struck dumb. When he worked these stories into a book the publisher, who had heard them from Kosinski’s lips, accepted it as a non-fiction work. Kosinski insisted it was fiction, and as such it was published. When people read The Painted Bird, thinking as I did that it was a novel heavily influenced by personal experience, Kosinski would say in public that “it was all true”.

Who really wrote his books is a question that I think will never be answered. There have been various allegations of plagiarism or cheating. Perhaps the most damaging of these was that one of his most successful novels, Being There (1971), appears to have been a rewrite of a minor best-selling novel, published in Poland in 1932. The plagiarism would be obvious to many readers in Poland, but the original novel was never translated into English. One George Reavey, an unsuccessful poet, came forward and claimed that it was he who had written The Painted Bird. Others said that Kosinski had worked in some mysterious (and undescribed) way with the CIA – his escape from communist Poland and entry into the USA was suspiciously easy and his political background was always undefined, but the thought of CIA spooks collaborating with him on a novel about the Holocaust is too ridiculous to be taken seriously. His first two books (non-fiction, about the Soviet Union, published with the by-line Joseph Novak) were dictated in Polish to a bilingual secretary. She then fleshed them out into readable English. It is no secret that Kosinski employed a private editor to work as rewriter and adviser on many of the novels, or that Kosinski produced many different versions of his manuscripts, bearing multiple changes with each appearance.

I knew none of this when I read Kosinski’s first two novels, nor, for that matter, when I caught up with his later books. The books existed, they worked as books. Of course, as an author I believe the name of a writer on a book is a sort of guarantee, a brand, a vouchsafing of true identity. But many books are published under pseudonyms, many books are heavily edited by third parties before publication. Were his actions just a matter of degree?

Knowing what we know about Jerzy Kosinski, or strongly suspect, adds something to the intrigue, not something that is particularly flattering, but it made him different, odd, disturbing. Anyway, the novels were for me a terrific stimulus. I often went to read sections of them when I was stuck on one of my own books, not to copy or imitate the style, but partly to try to renew that first revelatory discovery of Kosinski’s unique way of showing the art of the possible.

Reading James Park Sloan’s biography I frequently felt glad that I had never been part of Kosinski’s circle, that I had never met him. But then, suddenly, I remembered that I had met him once, very briefly. In 1983 he came to London to deliver the annual Scott Dawson Memorial Lecture to members of P.E.N. (of which Kosinski was a past president). It was held at the Royal Festival Hall, and the place was packed. In the interval I saw Jerzy Kosinski in the foyer, so I boldly approached him and asked him to autograph my copy of Steps. He looked at it, checked the print information, then said, ‘Have you any idea how rare and valuable this edition is?’

I said I did, and watched as he used a felt-tip pen to double its rarity and value.