I’m clearly not the most committed of bloggers – I can’t help noticing that I have not been here since the middle of April. It’s not because I have been assassinated by Charlie Stross’s fans, nor cast into outer darkness by China’s, nor indeed anything at all. The simple truth is that I have been doing what I am paid to do: which is (with a few ‘structured’ exceptions) stay at home every day and concentrate on what I’m writing.

I completed the first draft of The Adjacent in the first week of April, just before Eastercon, took that weekend off, then went straight back to the second draft. A second draft for me involves a complete rewrite from beginning to end, and is likely to take at least a few weeks more. My target for completion of The Adjacent is the end of July (just as everyone in publishing vanishes on vacation for weeks on end), and I still believe that’s a likely date. I am already more than 200 pages into it.

I rather enjoyed Olympus 2012 (the official name for Eastercon this year) – since the event a video has emerged: me on the platform. You may view it here. I appear after about 12 minutes, if you sensibly wish to skip the boring and irrelevant stuff that comes first.

In the first week in May, the Arthur C. Clarke Award went to Jane Rogers and her novel The Testament of Jessie Lamb, as exclusively pundited here, and a good thing too. The judges had a sudden outbreak of previously undetected literary taste and good sense, and against all expectations came up with the right book. Good for them – no need for them to resign, then. All is forgiven, chaps. Until Next Year.

The first of my structured breaks from the second draft came during the second week in May, with a short but unhurried visit to the Lincolnshire Wolds – a research trip for The Adjacent. I had never before visited Lincolnshire, and was pleasantly surprised. Amongst other places, I went to RAF Scampton (you have to book ahead, as it is an operational RAF station), where there are still the original hangars where 617 Squadron’s Lancasters were stored and repaired, and where Guy Gibson’s office is situated. (Not open on the day we visited, as the building is being refurbished.)

Outside the office is the well-tended grave of a certain Black Labrador, whose real name has become a matter of fear and loathing, but which is well known to everyone who takes an interest in these things. (For the record: I totally disagree with modern PC attempts to rename the dog – I understand that the Stephen Fry rewrite of the screenplay of The Dam Busters – produced by, of all people, David Frost, and which has been optioned by Peter Jackson – calls the dog ‘Nipper’.) 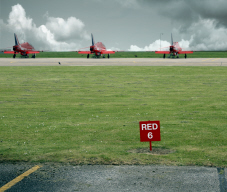 While at Scampton I was able to watch the Red Arrows practising. I might one day write about this, as it had a remarkable effect on me. For now, here is a photograph of the Red Arrows’ car park, with a glimpse of the aircraft in the background. There are ten such parking spaces, and the Red Arrows practise twice a day. I have seen the Red Arrows perform before, so what they do was not a novelty, but I must say that watching these amazing manoeuvres, behind the scenes, so to speak, thrilled me to the core.

Later to Coningsby, another operational RAF base, where we saw at close quarters the last airworthy Lancaster in the UK (there is one other in flying condition, in Canada). This is the Lanc that you glimpse doing a flypast at royal occasions, etc. In the same hangar there were several airworthy Spitfires and Hurricanes. If I had been able to make this visit when I was 14 I should probably have exploded with excitement, but now I am no longer 14 I just feel a keen interest and a warm sense of something or other which is probably a bit too naff to reveal.

In the bookshop I bought two books whose titles made me want to cheer aloud. As an inveterate book buyer I am used to feeling the uncontrollable acquisitive urge in a bookstore, but these two 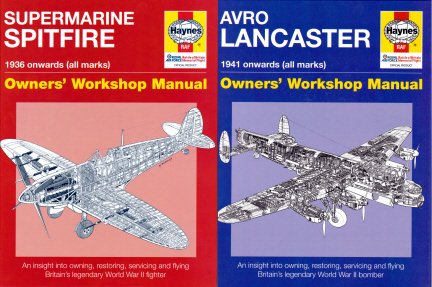 books were more or less emitting shrill whistles across the room, to get my attention.  Just look at their titles!

Afterwards back to work until the beginning of June, when a visit to a books festival, agreed and confirmed long ago, actually had to be gone to. This was Comédie du Livre, in Montpellier, in the south of France, and turned out to be not at all a grind (as dreaded beforehand), but a highly enjoyable visit, more like a holiday than, er, work.  Brilliantly organized, set in a beautiful medieval town, with the sort of weather you just never get in England: good coffee, good wine, great food … and several hundred writers.

Since then: back to the grind, and I shouldn’t be writing this.