A man is seeking an appointment he has to keep. He is inside a vast modernist structure, made of concrete and glass, with unsignposted stairwells and unobliging elevators. Other people are present: tourist groups, businessmen, transient visitors. Meeting rooms have long tables and reconfigurable walls to make the rooms into whatever size, shape and function is necessary. Abstract paintings hang on every wall. Members of staff are present, unfailingly courteous and blandly unhelpful. There are hints and suspicions of close personal contacts: rooms where people are eating, where there is a dance floor, where bedroom doors are firmly closed and labelled Do Not Disturb. Offices are glassed-in, or set up as boxed workstations. A motorway runs past. Could this be a hotel? Or a hospital, an office block, an airport terminal, a convention centre?

The images come from a masterpiece of the cinema, these days a forgotten and largely unseen one: Playtime. Three years in the making, and then delayed by several post-production snags, Playtime was eventually released in 1967, starring and directed by the French comedian Jacques Tati. It was then the most expensive film ever made in France, but it did not receive the worldwide success it needed to recoup the expense of filming, and Tati was bankrupted by it. It is rarely seen these days. Although Playtime is available on DVD, the original 70mm frame is cropped, and there have been cuts made to the immense running time. However, with the hindsight of nearly half a century it can be seen as a brilliant foresight into the worst and most soulless aspects of our modern life.

Playtime was made at roughly the same time as two other comparable French films – Jean-Luc Godard’s Alphaville (1965), and Chris Marker’s La Jetée (1962), although the delays meant it came out some time later. All three films have a distinctly Ballardian flavour – not a coincidence, because J. G. Ballard’s work has always been highly regarded in France. 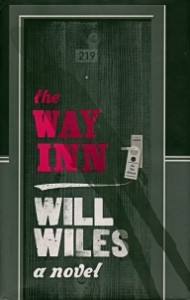 To say that Will Wiles’s new novel The Way Inn is strongly reminiscent of Playtime is intended as a compliment. The narrator, the protagonist, has the symbolic-sounding name of Neil Double. Double is a professional conference-goer, standing in for middle-grade executives who either do not want to go to the conference, or cannot. He attends the symposia on their behalf, takes notes and reports back. This is his job, and he moves from one hotel and conference to the next, frequently running into the same individuals, and always encountering the same types of people. He has relationships with some of them: he knows which of the other attendees are bores or pests, and he is constantly interested in the women he tries to pick up.

However, Double’s true passion is hotels. He loves hotels, everything about them: the furniture, the abstract paintings, the cuboid armchairs, the TV screen that displays an electronic welcome, the hum of the air-con, the room-service pan-seared salmon, the electronic door key that stops working if you carry it next to your mobile phone, and so on. He also relishes the environment of the modern business hotel: the adjacent motorway, the half-constructed new buildings next door and the muddy areas which will be developed next, the vast parking lots, the nearby airport and its lights, the attached conference centre that can only be reached by courtesy bus. Wiles describes all this with economy and precision, almost a litany of the details of that over-familiar if faintly repellent world of the chain hotel. Anyone who has stayed at the Radisson next to Heathrow Airport (location of several SF conventions in recent years) will recognize the endless corridors, the mile after mile of corporate carpet, the soundproofed windows, the view from those windows across concrete to nothing of human scale, the ease with which you can get lost in the identical corridors and landings and the concomitant habit of always taking the same, safely memorized route to your room, the particular type of bland “international” cooking, the inoffensively abstract paintings, the sense of being surrounded by a Ballardian urban wilderness which you cannot enter or understand, and which will endanger you if you try to walk through it or traverse it.

I have summoned the spirit of J. G. Ballard a couple of times, not accidentally. The Way Inn strikes me as the first authentically post-Ballardian vision of the world as it has become and as it is going to continue to be. Towards the end of his career, Ballard produced a couple of social satires: Millennium People (2003) and Kingdom Come (2006), with discernable elements of social satire in the two much stronger novels that preceded them: Cocaine Nights (1996) and Super-Cannes (2000). Will Wiles has taken up the satire where Ballard left off, while joyfully reviving memories of the great Ballard novels from an earlier period: The Drowned World (1962), Crash (1973) and Concrete Island (1974).

There are also Ballardian echoes in the way Wiles characterizes women (in particular the dominant, Amazonian and sometimes enigmatic figure of the hotel para-manager Dee) – there is a constant sense of male sexual awe, without anything ever happening. (Not true of Crash, though!) Wiles’s dialogue too has that odd Ballard characteristic: an errant, oblique, declarative, almost shouted way of coming at you, non-realist but also mundane and worldly. It gives the novel the weirdest feeling, a sense that there is more going on than you think, and then you find out that there is. The final Ballardian touch I will not spoil, as the pleasure in revealing it should be Wiles’s, not mine, but I was reminded happily of one of Ballard’s Borgesian short stories published in 1982. I’ll leave it to others to trace the reference, but to narrow the search the story I’m thinking of was included in his collection War Fever (1990).

I loved The Way Inn, read it with endless pleasure and interest, and am delighted that in this year, apparently doomed to be eponymed by a class of emergent young science fiction sensation-mongers, a mature, expert and wonderfully original talent has appeared in the person of Will Wiles. For me, The Way Inn is the most satisfying and radical new novel I have read so far this year, way ahead of the rest.