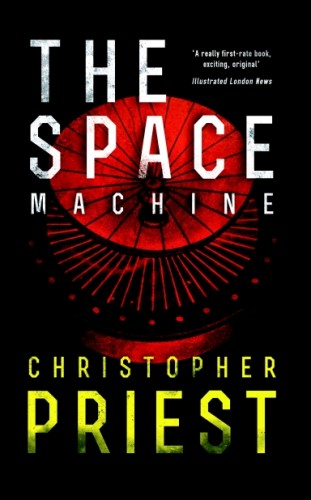 Here is the cover by Valancourt Books for their US paperback reissue of The Space Machine, which was first published by Faber & Faber some 40 years ago. (Yes, that’s FORTY. It’s not the sort of sentence I’m keen on writing. Read it quickly, please.) Valancourt’s edition is going on sale next month, March 2016.

Unlike a child that might have been born in 1976, The Space Machine is 40 years old only by date: it is not an adult, certainly not a middle-aged adult, but a child of its time. My time, in fact: it was my fourth novel, which I started writing more or less straight away after completing Inverted World. It is to my eyes still fresh to read, although I know that if I were to try to write something like it now I would probably muck it up. Lacking self-consciousness can be an advantage.

By the way, this year marks the 150th anniversary of H. G. Wells’s birth. His life and mine overlapped by just over three years, so I inappropriately think of him as a contemporary. I realize now, with hindsight, that my writing of this novel might seem like a bumptious act. At the time, part of what impelled me was the realization that I was then more or less the same age as Wells had been when he was writing his scientific romances — I still consider those to be his best work in fiction.