Nearly a decade and a half ago I wrote and published a book about the making of the film The Prestige. It’s called The Magic – the Story of a Film. Over the years many readers have purchased copies, which is still available in its first edition hardcover, as well as paperback. Courtesy of David Langford at Ansible Editions I now have an ebook version of The Magic available, and details of it may be read here. 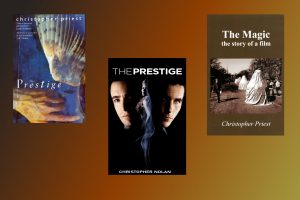 The film was of course based on my own novel. It was directed by Christopher Nolan – at that time he was not the major Hollywood director he is now perceived to be. I took a special interest in the process of transition from book to film for reasons which should be obvious. I had little to do with the actual mechanics of the production, but being a witness to a lot of bemusing activity happening over there in far California was intriguing enough. The process of adaptation appealed to me as a craft matter: I knew better than anyone what a complex and cerebral book it was, and when I heard that a film was in preparation I started wondering how on Earth anyone could make anything coherent from it. When I was able to see the finished product the answer was a welcome and rather satisfying surprise.

Years later the film of The Prestige looks better and better. It is routinely under-rated by Nolan’s fans, who prefer the three films he made about The Batman, and the special effects extravaganzas that followed those. Not being that sort of fan I disagree. The Magic is therefore a book writer’s analysis, and celebration, of what is probably Nolan’s most interesting film to date.