The Explorer is the second of James Smythe’s novels to be released within a few months. This UK publication is datelined 2013 although it is copyrighted 2012, perhaps from an earlier US edition. Could this be a first novel, or would that be The Testimony, released a while earlier? The instinct is of course to go critically a bit easier on a first novel, so just in case …

First impressions are good. Smythe is young, he writes good clean prose, he is obviously serious in intent (and therefore we might assume he is ambitious as a writer, ambitious in a greater sense than just becoming a best-selling or highly paid author, but maybe those too), and at a time when many young authors are coming into the field of fantastic literature equipped with not much more than a love of fantasy epics or Doctor Who, he seems to be well versed in the various tropes of serious science fiction. 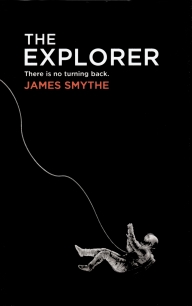 The story of The Explorer is simply described: a spacecraft is launched from Earth bearing six astronauts. Within a few days of the launch the crew members start dying, and soon only one remains alive: a young journalist called Cormac Easton. Cormac is unable to steer or control the craft, so he is trapped inside while it continues with its programmed mission: to go further into deep space than any manned craft has gone before. Gradually the spaceship runs out of fuel and supplies until it is inevitable that Cormac will not escape with his life. Before the craft becomes completely unusable he activates some kind of auto-destruct system, and he and it are destroyed. This happens before the end of page 52. More than 200 pages of novel remain. What then follows I will leave to Smythe to relate as it is where the book becomes unusual and intriguing.

Stop reading here if you believe that first novelists (or even second novelists) should have their attempts rubber-stamped with routine approval. It’s also a good place to stop reading as the partial plot synopsis in the previous paragraph might well make you curious about what happens next. I certainly was curious, and in fact Smythe keeps the mystery going almost until the very end. I don’t want this blog review to make people think, even for a moment, that this is not a book worth reading. The uncommon quality of its plot makes it a novel that stands out from the rest, and certain details and anomalies add to that.

The novel has many such anomalies, some of them minor. The spaceship, for example, is called the Ishiguro, named after a Japanese scientist called Hidemori Ishiguro who designed the ship’s engine. Ishiguro is a fairly common Japanese name, so that’s OK. But it’s also the name of Kazuo Ishiguro, a well-known Japanese-born novelist who has already shown a more than passing interest in novels based on speculative ideas. The use of his surname here leapt out at me and it made me wonder if it was some kind of metaphysical cross-reference, a hint that the author was writing about something more than a straightforward journey into space. Maybe that’s just a detail.

But a larger anomaly, larger because it continues throughout the novel, is created by all manner of practical descriptions and accounts of the lives of the astronauts and the spacecraft itself. I was unconvinced by the astronauts themselves, simply because they behave like no other astronauts I have ever heard of or seen in action on television. The one thing everyone knows about astronauts (and Smythe knows it too, because he describes it) is that they go through years of selection, preparation and training, and detailed physical, mental and psychological testing. Even if all their personal idiosyncrasies are not entirely ironed out or controlled before the launch, the training imposes a high standard of teamwork and practical precision. The five or six allegedly trained and tested astronauts in The Explorer go to pieces within a few days of the start of the mission: a couple of them are shagging in a spare storeroom, they call one of the women astronauts “Dogsbody”, they bicker and argue about trivial matters, and soon they start dying in mysterious circumstances.

As for the spaceship itself, it is described as having bags of unused space (including the spare storeroom), seems clean and tidy for most of the time, but above all has a double-skinned hull. This design feature seems to have more relevance to the needs of the plot than to the operation of the craft, because it becomes essential as a long-term hiding place. I was sometimes reminded, uncomfortably, of the similar narrative device in Flowers in the Attic – not a comparison a good writer like Smythe will welcome. This double skin is apparently sufficiently wide for someone to move around in, and contains enough air, heating and, I think, plumbing for a man to occupy the area for weeks on end. Secret viewing hatches are everywhere, and these enable the story to continue. It is all too contrived for comfort.

Then we find that the craft is capable of “stopping” in space more or less at the throw of a switch, and as soon as it stops the “gravity” comes back on. When the engine is turned on again, the occupants of the spaceship immediately suffer the conditions of free fall. (Surely this, or something like it, would be more likely to work the other way round?) Astronauts carrying out maintenance or repairs during any of these “stops” have to don spacesuits and carry out space walks – throughout these EVAs they continue to argue about personal matters and disagreements, and when they do get down to perform the tasks for which they have left the spacecraft most of their work is to sort out a mass of wiring contained behind an access plate, a bit like telephone engineers repairing crossed lines in a terminal on the side of a suburban street.

None of this (or a lot of other stuff like it) convinced me on any logical or practical level, and I say this from the point of view of someone who does not have much grasp of technological or space-science procedures. But the overall falseness of the set-up, taken together with my much more instinctively dependable doubts about the behaviour of the characters, had the promising effect of making me wonder what the author might really be up to.

The text quickly starts showing evidence of these irregularities, and so I began musing about the whole thing being somehow in quotation marks, perhaps a dream or the ravings of a madman, or a description of a real-time simulation being carried out in a closed hangar somewhere in the Nevada desert, or maybe even a reality TV show. Something more than the events being described seemed to be going on. These totally implausible astronauts, flying in a spaceship like something out of Dan Dare, on a mission which appears to have no scientific or exploratory purpose at all, could not really be doing what the author insists they are doing. Could they? There must be another layer to all this nonsense. My interest was therefore held, and continued to be held for most of the rest of the novel.

Without giving too much away, because the plot of The Explorer develops in genuinely unexpected ways, the most serious weakness in the novel is the description of the characters, not just as astronauts but as people. We learn hardly anything at all about them in the first 52 pages, so that in the following sequence, the major part of the novel, the new and significant information we are given about them does not carry much surprise or interest. Smythe is experimenting with narrative unreliability here, which I find interesting, but that is a literary technique which is really only effective when the unreliable text seems convincing and thus memorable before it transpires that the author has not admitted everything relevant. For instance, the belated news of a pre-mission relationship between Cormac and one of the female astronauts emerges as additional information, not a revelation of any kind. This is because the woman herself barely comes to life whenever she is mentioned or takes a part in the action. By the time she is promoted by the author to being a major character, we are left wondering why she was so wan and bland before. The same is true in a similar way when we learn about the reality of Cormac’s marriage – not all is what it had appeared to be at first. The two male astronauts, named Quinn and Guy, are more or less indistinguishable from each other (in the way Cormac reacts to them, and because of the equal narrative weight the author gives them), even though one of them is mad and gay and German, while the other is not. Characterization is the key to all good writing but because Smythe has his attention elsewhere for most of the book, his ambitious and clever plot is significantly undermined.

These negative comments are directed to the author, should he come across them, and are intended in a constructive way. There is a lot to like in The Explorer, and I wanted to celebrate it more. James Smythe is obviously an intelligent writer, talented and seriously intended, and I look forward to whatever he comes up with next. I gather he is writing a sequel to The Explorer, news which, from the perspective of having just finished the first book, makes me wonder yet again if some numinous endeavour is going on. Some greater or more universal reality might be at hand.

To the reader I say: set aside the reservations I have expressed and read The Explorer with an open and welcoming mind. It is different in tone, subject-matter and ambition from almost any other SF novel you might read this year. No giant moles, artful coppers or talking horses here …