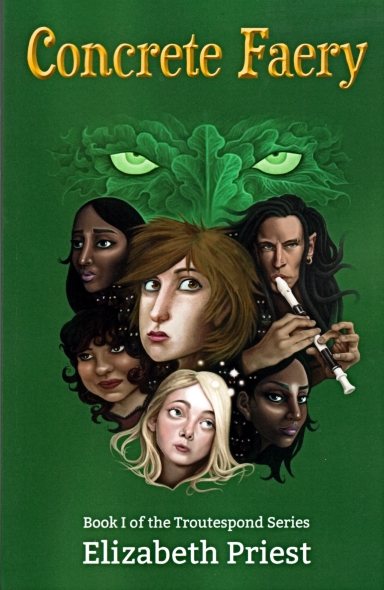 I can only say this once, so pay attention! Concrete Faery is a novel written by my daughter, whom I adore and admire, and for all sorts of obvious reasons is a writer I can say nothing about in public without arousing deep suspicions of nepotism. Onward …

Concrete Faery is Lizzy’s first novel, a YA fantasy, written engagingly and with a constant sense of dry and sceptical wit. It has an amusing idea at its heart: that if faeries did in reality exist, nosey teenagers would (a) notice them before anyone else, and (b) turn out to be the worst people to have to deal with them. It is set in a bucolic nomansland, the English village of Troutespond, instantly recognizable, worryingly weird.

This is the first novel in a series – Book Two, The Changeling’s Choice, will follow in April next year and be launched at Eastercon, and the third novel, Midsummer Dance, will follow later in 2019. A total of twelve Troutespond books will make up the series – Lizzy has already completed drafts of several of them, and is working on the rest.

I had nothing at all to do with the writing of these books (dratted children do things behind parents’ backs), and apart from an early introduction I had nothing to do with getting the books published. It is all Elizabeth’s own work, and I hope she does well with them. Luna Press, who have an interesting left-of-field list of fantasy and related books, are to be congratulated for taking her on, and for producing such an unusual and good-looking edition.

Copies are available in both print form and Kindle from Amazon.co.uk – and here is Elizabeth’s own website, and Luna Press’s.

I’ve said it once — now my lips are sealed.