Today is UK publication day for The Gradual, but resisting temptation to put up yet another scan of the attractive Gollancz cover, let me show you an image of something else entirely. 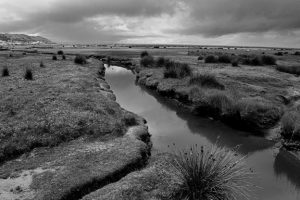 This is a part of the huge area of estuarial salt marshes at the mouth of the rivers Taw and Torridge. The photograph was taken on the southern side of the rivers, known as Northam Burrows. In the distance there is a glimpse of the seaside town of Westward Ho! (The exclamation mark is part of the town’s name, and has nothing to do with my possible surprise or excitement about it.)

I took the photo because I had my camera with me, and because it struck me as an interesting view. I took several more that day, in July this year, and this was the best of them.

Much later I discovered that a local arts organization called Beaford Arts was running a competition to celebrate their 50th anniversary, and were inviting photographic entries inspired by the work of James Ravilious.

Ravilious’s work as a photographer is not, I think, widely known outside Devon, but to my mind his photographs are not only artistic and beautiful, but have real social worth too. He was the son of the artist Eric Ravilious, a painter whose work I had already come to admire as he was based in Eastbourne – many of his paintings were inspired by the East Sussex coast where I was then living.

James Ravilious, working with Beaford Arts for about a quarter of a century, from 1972 until his premature death in 1999, set out to make a pictorial record not only of the unspoiled, peaceful and vulnerable scenery of North Devon, but also of the people who lived and worked in the area. Many of the people who live around here remember him well – he was much liked in his lifetime. He took more than 80,000 photographs in that quarter century, and also made archive copies of around 5,000 more photos taken by other photographers in earlier years. There is probably no other area of rural England so intensively recorded by such a wealth of remarkable photographs. In my opinion Ravilious is easily the equal of great French photographers like Henri Cartier-Bresson (who had originally inspired Ravilious to take up photography) and Robert Doisneau. Both of these men worked almost exclusively in black-and-white, as did Ravilious.

Many of Ravilious’s pictures can be seen on his website. The whole archive is maintained by Beaford Arts, and much of that can also be viewed online.

The other day I learned that my photo of Northam Burrows has been selected to be exhibited, and will be displayed alongside a photograph taken by Ravilious in 1977, of Braunton Burrows, on the opposite side of the estuary. I believe the exhibition will be touring in Devon soon, but I don’t think it will be shown outside the county.

So do take some time to look at Ravilious’s astonishingly beautiful photographs, and reflect, as he wished us to do, that this unique tract of England might one day be casually destroyed by those who have an insatiable need for road widening schemes, shopping malls and estate houses.