A Muslim is ‘one who submits’ – Michel Houellebecq’s new novel is called Submission, and it describes the Islamization of France in the near future. A self-aware novelist, Houellebecq makes clear his particular, peculiar understanding of Islam. The title in French is Soumission, and the straightforward translation to the English equivalent is obvious, but ‘soumission’ has a secondary meaning in English, and probably in French too: submissiveness. There’s a fine difference. Authors often pick titles which use secondary meanings to suggest another way of interpreting the novel, a deeper level of intent. 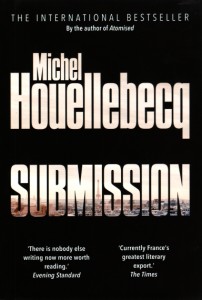 On page 217 Houellebecq describes what he thinks the real meaning of Islam might be. The narrator of the novel is François, a middle-aged university lecturer, who is having the new French world explained to him. Houellebecq puts the words into the mouth of one Robert Rediger, a charismatic French academic who has reacted opportunistically to the democratic rise to power of an Islamic régime in France. Rediger has joined the new government and converted with alacrity to Islam. With several young female students, he has quickly caught on to the attractions of polygamy. He and his multiple wives now live in a sumptuous house in rue des Arènes, in the 5th arrondisement of Paris, the same house, apparently, where Anne Declos wrote the novel of female sexual submissiveness, Story of O. Through Rediger, Houllebecq makes a link so crass that it is momentarily stunning. Rediger explains to François:

Houllebecq is notorious for causing offence and presumably saw this political satire as an affront to the French bourgeoisie – it seems more likely that the elders of Islam are going to be upset by a comparison of their faith with Anne Declos’s graphically described novel of male sexual dominance.

Houellebecq is confusing the trappings of Islamic culture with the tenets of Islamic faith, a fundamental error made by many Islamophobes in the West, but the consequences of that are his problem. I’m more concerned with his novel.

There are superficial similarities with Orwell’s Nineteen Eighty-Four, few of them flattering. Rediger, for instance, fulfils roughly the same sort of role here as O’Brien in Orwell’s novel: he is the party insider, who explains and defines the new and authoritarian régime to François, the book’s narrator. His function is first to explain to François where he has gone wrong, then to offer him salvation. Rediger’s passages of explanation are maddeningly dull – they seem to be based on political party handouts, or newspaper articles, or debates on TV current affairs shows.

Rediger has no literary function beyond exposition, which is why the apparent similarity to Orwell is a trite one: O’Brien was a false-flag operative, luring Winston Smith into a feeling of trust before betraying him, a crucial and memorable sequence which Orwell used as an illustration of the ruthlessness of the Big Brother régime. Houllebecq lacks that kind of subtlety, or any sense of drama. Rediger finishes his explanation and François now is ready to convert to Islam, presumably much taken with the idea of a new beard and some polygamy with his young students. In his own way he too is now loving Big Brother.

Houellebecq has hardly any story to tell: a presidential election in France in 2022 leads first to an inconclusive result, then after the run-off a Muslim politician called Ben Abbes, leader of the so-called Muslim Brotherhood (but not the same one as in Egypt), forms a government. Almost overnight the constitutionally secular French Republic is transformed into an Islamic nation, rather along the model of Saudi Arabia. All women wear veils in public, alcohol is banned, universities are closed, beards are grown, Shariah is introduced.

François has a job at a university, but loses his job at the university. For a while the novel feels like a watered-wine version of The Day of the Triffids – the old order is breaking down and survival is imperative! Riots on the streets of Paris! Shortages in shops! Time to get away from civilization! François jumps into his car and drives out of Paris in his powerful VW Touareg – ‘a turbo-diesel V8 and 4.2 common rail direct fuel injection, it could go 240 kilometres per hour’. He thus speeds down ‘strangely empty’ motorways while everything in the country seems to be ‘broken’. He finds a hotel in Martel (TV not working, no food), then a more congenial one in the Christian shrine village of Rocamadour. He settles down comfortably and spends a lot of time sitting in a church (this is where we and Houellebecq part company from Triffids). After a return to Paris, where the riots appear to be over, or more likely forgotten, he leaps on a TGV (SNCF still working OK) and escapes to become an oblate at a monastery, returns to Paris, listens to Rediger explaining and explaining …

A secondary theme in the novel is François’s interest in the 19th century novelist J.-K. Huysmans, who was the subject of his dissertation years before. Huysmans worked as a civil servant for many years, and was noted for his pessimism and interest in the decadent movement. He became a religious convert after he spent time as an oblate in a monastery. This is the same monastery at Ligugé that François flees to. What sort of point is Houellebecq making here? Are we being invited to see a parallel between François and Huysmans? So it would seem, but Houellebecq’s infilling about him is sketchy to say the least. The thinness of the connection looks perilously like a bit of sophistry, a factitious attempt to give some kind of literary extra meaning to his otherwise uninteresting story.

Speculation about the near future seems these days to be increasingly attractive to writers who would otherwise disdain the idea of writing what they appear to presume is trashy genre science fiction. Houellebecq is just the latest and by no means the worst … but he’s close to the worst. The point is that the literary requirements of all fiction remain necessary when writing speculative or fantastic fiction.

In the first place, a metaphorical level is required: the basic theme of the novel (in this case the Islamization of France) needs poetic irony and resonance: a sense of place, or dread, or rationalism, or humour, or distance, or invention. If you write as Houellebecq has written here – spouting the knee-jerk fears of the tabloid press, or the homilies of ambitious politicians, or the sonorities of newspaper leader writers – then you end up at best with a sort of manifesto. But if you fall below that best, as Houellebecq does in Submission, you do little more than rehash clichés and generalizations and ignorant assumptions and political gobbledegook. Islamophobia is already familiar to us, the daily stuff of headlines, politics and journalism. And in a novel even metaphorical content is not enough on its own: a novel of course requires characters, a mood, a sense of place, a love of language, a story, a plot, a reason for the book to exist that is greater and more lasting than the passing fears of the moment. Houllebecq delivers none of these novelistic qualities, but at least his book is short and soon over. The translation, by Lorin Stein, is well done.