In George Melly’s autobiography, Owning Up (1965), he describes how he became the victim of a violent assault outside a hotel in Manchester. He had been singing with Mick

Mulligan’s Magnolia Jazz Band and at the end of the gig he was standing on the steps of the building, breathing the fresh air, while the rest of the band were still inside packing up their instruments. A group of young thugs approached – one of them had earlier been ejected by Mulligan for pulling a razor on him, and he and his mates were now looking for revenge. One of them had a bottle, which he started tapping with increasing strength against a brick wall. Melly writes, ‘When that breaks, I thought, he’s going to push it in my face.’ The assault began with a head-butt, making Melly’s nose bleed.

Melly, who says he was ‘anaesthetized by fear’, reached into his pocket for the only thing that might work as a defence: it was a book of Surrealist sound poetry, written by Kurt Schwitters, the Dadaist. Melly briefly explained to his attackers what the poems were, and started reading aloud from one called ‘Ursonate’. The first four lines go as follows:

‘Slowly, muttering threats, they moved off,’ writes Melly. (George Melly had a lifelong commitment to Surrealism, being a noted collector, critic and lecturer in the genre.)

I kept remembering Melly’s anecdote, which I interpret as evidence of how effective art can be when well deployed, all the way through my reading of China Miéville’s new novel, The Last Days of New Paris. Much the same thing happens. 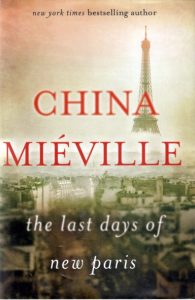 The story, such as it is, describes the aftermath of an ‘S-Blast’ (Surrealist Blast, I assume) set off in Les Deux Magots in Paris, in 1941, during the Nazi occupation. The S-Blast unleashes a nightmare brigade of beasts and ‘manifs’ from the world of Surrealist art. These empower but also threaten the small band of Surrealists still hiding in Paris: La Main à Plume. Soon a violent three-way battle is convulsing Paris, between the ‘manifs’, the Surrealist fighters and the Nazi occupiers. The war, an extension of the Nazi strategic plan Fall Rot (‘Case Red’), continues until at least 1950, which is when much of the novel is set. The only surviving member of La Main à Plume is one Thibaut, who insofar as the novel has a leading character other than the narrator, is the leading character.

There is hardly any trace of story, but what there is describes the appearance of one Surrealist icon after another, which either attacks or is attacked or avoids being attacked. At the back of the book nearly all of these manifestations are carefully cross-referenced to the original artwork, or sketch, or pensée, by page number. (Thus, very early in the novel what appears at first to be two women crazily riding a tandem bicycle, soon turns out to be a ‘manif’ of Leonora Carrington’s Goya-like pen-and-ink drawing called ‘I am an Amateur of Velocipedes’. This is a bicycle-like machine with a female figurehead mounted on the handlebars – a reproduction of it is quickly discoverable online. An endnote exists. The narrator of the book, in a dialogue with an elderly Thibaut, carefully documents the source. No one can be left in any doubt about what it is.)

As the novel proceeds a whole bestiary of Surrealist oddities enters the book, each similarly traced to source by the narrator. Some are famous: Max Ernst’s painting of an elephant-like metal bin, ‘Celebes’, is one, and ‘Exquisite Corpse’, a collage by André Breton, Jacqueline Lamba and Yves Tanguy, not only comes alive but takes a prominent role. Soon, the unstoppable carnival of spinning Surrealist images becomes dizzying.

I hoped and intended to like this novel, assuming it was a return to form for China Miéville after a period of some uncertainty. After finishing it, I felt Miéville should be congratulated on writing a unique novel. It is ambitious, obscure, unusual, difficult, provocative, fantastic, vainglorious, and not at all too long. His language is at its best bizarre, experimental, sometimes daringly impressionistic. I cannot recall another novel like it. All this is to its advantage. However, it also presents a congeries of literary problems, serious ones.

‘Weird’ is a word sometimes applied to Miéville’s work, often by the author himself. In fact, there is little about the novel that is weird. If you accept the conceit of the S-Blast, and the madness of war extended almost indefinitely, much of the novel reads like the catalogue of a Surrealist exhibition, or a Thames & Hudson book of art reproductions. We move from one ‘manif’ to the next, programme notes to hand, like captions to illustrations or narrative cards attached to the wall beside the piece of art. The reader is not given a story to follow, or the emotional lives of the characters to grow with. We know nothing of the lives of the characters outside the events in the novel – where do they live?, what do they do at the weekend?, how do they eat?, etc. There is as well a lack of comprehensible dialogue, no plot to speak of, and an extremely poor sense of place – Miéville writes ornately, but the ambience is thin. There is none of the evocative descriptive prose of (e.g.) The Scar.

And because it is a narrative totally lacking in atmosphere, sensuality, character, motivation, and much more, it becomes a struggle to maintain interest. This is the kind of book you press on reading not because you have found something to enjoy or be intrigued by, but because you are determined not to be beaten by its extraordinary flatness.

Like the Surrealist art that the novel describes, The Last Days of New Paris is not weird at all,

but odd and fanciful. Surrealism developed from Dadaism, which was based bizarrely on anti-war feelings in the years 1914-18, and is full of fancy. Trains emerge from fireplaces or chug through someone’s beard, ants crawl across melting watches, lovers kiss with their faces shrouded, skeletal bones clutch an egg, a urinal is presented as an object of beauty and usefulness.

Miéville’s novel, by adding nothing to these fanciful works of art beyond making them move and cataloguing them, is full of fancy. It even becomes more fanciful still, because a novel is itself a work of art and this one should have brought something to the intriguing subject of Surrealism, more than being simply an illustrated list of examples.

The early work of J. G. Ballard (notably his stories in the collection Vermilion Sands) is wonderful proof that the images and feelings of Surrealism can be summoned and enhanced in English prose. Ballard, like Melly but seemingly unlike Miéville, was dedicated to Surrealism. Throughout his career he often cited its images and manifestos as being major influences on his writing.

Fancy is related to fantasy, but it is a slot lower. While fantasy literature draws on psychic archetypes and symbols, images of the dream state and the human wish for a sense of otherness, it also inspires imaginative ideas unconnected to the reader’s experience of reality. Fantasy often summons a series of pleasing or exciting or gratifying mental images, serving the reader’s need for the feeling of well-being not present in the real world – equally, it can suggest frightening or disturbing or warning images, again satisfying a need for excitement or menace or apprehension not often encountered in real life. Written well, fantasy is powerful stuff, ultimately based on reality and psychological experience. And yes, fantasy is often genuinely weird.

On the other hand, fancy is a whim, a surprising thought, an unexpected juxtaposition, an anachronism, a party piece. It treats the ridiculous with unfruitful solemnity. It lacks metaphorical depth. While fantasy can move, excite, depress or stimulate a reader, fancy gains only a reaction: at first it is one of amusement, or even of being impressed or astonished, but when fancy piles on other fancies, as in Miéville’s novel, then it is all too much. It becomes risible, annoying, irrelevant, even unsurprising – it provokes irritation, anger, a wish for better things.

An example from Last Days: It was one thing for the poet Paul Éluard to suggest fancifully that L’Arc de Triomphe should be turned into a giant urinal – it is quite another order of fancy for Miéville’s ‘manifs’ to tip the monument on its side, then have it streaming with self-generated urine. Self-generated urine? Where does that sort of image lead us, what does it mean, what on Earth was the author thinking? (P 54.)

A sense of the author’s abstraction, or distraction, recurs too often for comfort. Miéville is presently at the top of his game, and we expect him to be committed to his work and thus give a great performance. Far too often in Last Days there are lapses of style, grammar. The narrative is told in two tenses, the present and the past perfect – we switch between the two without apparent purpose. On pp 68 and 69 there are two such switches: from present to past perfect, to present again. This is a sign of something going wrong: either the author was not concentrating on what he was doing, or it was a meaningless stylistic mannerism he rather liked, or he didn’t realize he was doing it, or he didn’t care that he was doing it. Whichever of those four betraying signs is the one, it’s a no-win.

He has also not been well served by his copy-editor. She was not much older than Thibaut, he thought. She looked at him with urgent eyes (p 6). Who thought that? Who is ‘he’? The entire passage before and after this is in the third-person, and it is about Thibaut, but in the first of these sentences Thibaut appears to be thinking about himself. In the second: how can passive organs like eyes ever be ‘urgent’?

This sort of carelessness is a betraying detail – there are more than a few others, and it would be tedious to list them all. The four revealing conditions under which the author allows changes in narrative tense apply here too.

I found myself breaking a personal rule and began making pencil underlines of dodgy words and phrases. Like most of its kind the thing is obviously in pain. But that size, whatever its injuries or sickness, they will not help him (p 19). We expect better writing than this from a serious and successful author — we are entitled to expect better.