Nevil Shute wrote several novels with speculative content, of which the most celebrated is probably On the Beach (1957). Although his style was conventional and he is often thought of as a middlebrow author, Shute often had adventurous ideas and put considered speculation into his novels. No Highway (1948) is known for containing an accurate prediction about the catastrophic effect of metal fatigue on airframes (Shute was an aeronautical engineer), and his 1938 novel What Happened to the Corbetts contains a description of the indiscriminate bombing of the city of Southampton. Until I read it recently I did not know that In the Wet (1953) is also a speculative novel: 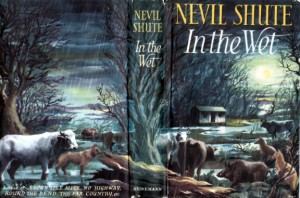 It is perhaps the oddest book I have read this year. Odd not because of its story (which is a relatively straightforward speculative account of a possible future for the British monarchy, written shortly after the accession to the throne of Elizabeth II), but because of its intricate literary structure. It is in fact structured in such a complicated way that I am still not sure if Shute wrote it out of fiendish planning, or if the complications of the story got out of hand and he simply lost control of it.

The principal narrator (i.e. the one who starts and finishes the novel) is a vicar recently appointed to a remote part of Queensland, Australia. The first 60 pages or so of the novel are an account of his efforts to bring his pastoral work to the local inhabitants. This is not thrilling – several times during the long opening sequence I was tempted to put down the book, but in the end did not. The main story eventually emerges: the vicar is present beside the deathbed of an elderly man, a local drunk called Stevie, who is believed locally to have been a pilot in the RFC during the first world war. The two men, and a nursing sister, are trapped by torrential rains in an isolated shack in the Queensland outback. The dying man relates his life, a sort of confession, and this takes the form of a long flashback.

The first structural or narrative surprise comes with the beginning of this flashback. The dullish opening of the novel is told in the first person by the vicar, while the long narrative of the dying man (which makes up most of the book) is told in the third person. Although this is only a minor thing, you would expect it to be the other way around. Then there is the way in which the flashback begins, which Shute slides into skilfully and almost imperceptibly. One moment you are in the Queensland shack with the rain hammering down on the galvanized iron roof while the elderly vicar is straining to hear the dying man’s delirious words, then almost between one sentence and the next we enter the main narrative, the third-person story of the man’s life.

This is obviously set in the past, when he, Stevie (whose real name he now declares is David Anderson), was an Australian Air Force pilot attached in the UK to the Queen’s Flight, and operating a new kind of aircraft called a Ceres – a long-haul jet aircraft, probably based on an aircraft Shute had once worked on, called an Avro Atlantic (a civil variant of the Vulcan bomber). It soon emerges that the actual date of this memoir is somewhere in the mid-1980s. In other words, Shute, who was writing in 1951-52, was setting this sequence thirty years into his future. This of course implies to the reader that the narrative of the vicar, who is listening to and reporting the flashback, is many years beyond even that, perhaps another three decades. An alert reader might at this point be wondering at the real ages of these people. The vicar has already told us he was born in 1890, while Stevie is said to have been an operational pilot in 1914-18, yet is still alive and drinking hard in the second decade of the twenty-first century. I.e., about now.

That matter will be resolved to some extent by Shute’s story. For the time being, we are following his speculative account of the future break-up of the Commonwealth, and the growing independence of nations such as Australia and Canada. Britain in the 1980s is depicted as being in steep decline, with a wrecked economy, austerity politics and even the remains of wartime food rationing. Australia is a much better place, with a burgeoning immigration and a huge enlargement of its main cities. (Shute and his family had emigrated to Australia in 1950.) A love story develops between Anderson and a royal aide called Rosemary. Although all goes innocently and well between them, Anderson is troubled by vivid dreams and at one point suffers a lucid and apparently predictive nightmare in which he sees himself in a shack in Queensland, dying while the rain pours down and a vicar sits in attendance. However, he awakes to his normality and it appears to have been only a dream.

At the climax of the long flashback narrative, Anderson and Rosemary are about to be parted but have plans to get married. During the night before they are to part David Anderson falls into a troubled sleep, with a feeling that he and Rosemary are drifting inexorably away from each other. He comes to his senses, but finds he is lying at the point of death in a rough bed, in a shack in the Australian outback, while the rain pours down. We return abruptly to the first-person narrative of the vicar, sitting beside him, who hears the old man utter his last word: ‘Rosemary.’ Stevie’s death follows immediately.

The novel is far from finished, although there are only about 25 pages to go. One revelation after another is to come. We learn that the real name of the dead man was never ‘David Anderson’, but Stevie, or Stephen, Figgins. The vicar who has related the story admits he was delirious with fever so might have misheard or misunderstood, the nurse who was with him says he was in fact asleep for many hours through the period in which Stevie was allegedly telling his story, and furthermore she denies hearing anything at all said by Stevie. In a worried way, the vicar starts to wonder about the nature of reality. Later, apparently now recovered, the vicar comes across a man called Anderson who works in the bush, whose wife gave birth to a baby boy at more or less the exact moment that Stevie Figgins died – she can’t decide on a name for the child, but thinks it should be either Stephen or David. At this point our narrator more or less gives up trying to work out what might have happened, or indeed might yet be about to happen, and the novel ends.

This synoptic account has left out many interesting details of plot and background, particularly in the speculative section of the book, which looks forward to a time in Shute’s own future (which is of course the recent past for a modern reader). It is mildly fascinating to come across Shute’s guesses about the future, most of them wrong, but a few rather uncannily accurate. The structure of the plot is what I have described here, not the plot itself. In the Wet is indeed an extremely complex novel, written between his two other, better-known speculative novels: No Highway and On the Beach. Some of it is sophisticated and intriguing; much else is somewhat banal, inhibited in social and sexual terms, and at times (particularly in the matter of the central character’s nickname, which I have left out of this account) embarrassing to a contemporary reader. It was, though, a fascinating literary discovery, one I hope other people will make.