Since the beginning of April this year I have been absorbed in writing a new novel, which has led to a general paucity of entries here. It has also meant that I have neglected to mention something rather unusual and (for me at least) thrilling. The MSU Broad Gallery (patrons Eli and Edythe Broad) has mounted an exhibition of artwork inspired by my novel The Prestige. It is called The Transported Man. 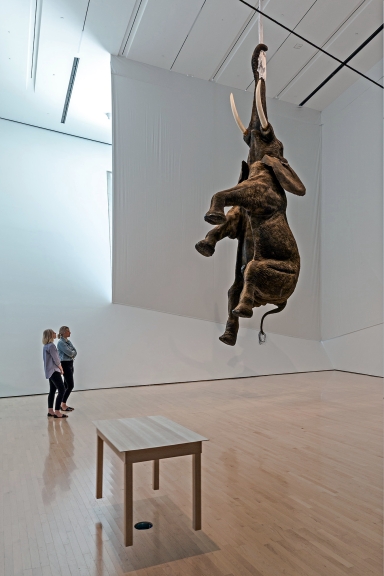 The curator of the exhibition is Marc-Olivier Wahler, previously director and chief curator of Palais de Tokyo in Paris, and the gallery is at Michigan State University in Detroit. It opened on April 29 and continues until October 22. I have not seen the exhibition myself, nor have I even seen the catalogue, but I know that M. Wahler has been planning this for nearly a decade. Originally it was intended to be mounted at Palais de Tokyo, but he has recently moved to the USA and is now Director at the Broad.

Information about the gallery is at the Michigan State University website, there is a review of the exhibition at The Detroit News, and an extended interview with Marc-Olivier Wahler here. I am unlikely to be able to get away from my desk until I have delivered this novel, but if you are near enough to Detroit to visit the gallery I should be greatly interested to know what the exhibition is like.