What can you ever know of a major city, a foreign country, from a short visit? For a few days in April last year I was in Kyiv (Kiev), attending the Eurocon. When you are invited as a guest, when you have never been to a country before, when you speak nothing of the language, it is not only impossible to form reliable impressions of the place, it would also be close to bad manners to assume you could. You go where you are taken, see the places and things you are shown, you try to find your way around on buses and the metro, you tend to stay in the company of the local people who can speak your own language or other visitors whom you might already know from other trips to other places, you make friends with the people who have invited you … and eventually you gain a glimpse, but only a glimpse, of what are the lives and concerns of these people who are being so generous and welcoming to you. That’s what it was like for me in Kyiv.

I had few preconceptions before I went. I knew little of Ukraine or its capital city, but I was aware, in a horrified sort of way, of what had happened there during World War 2, when it was occupied at different times by both the Soviet Red Army and the German Wehrmacht. One of the worst Nazi massacres occurred in a ravine in a park called Babi Yar, near the centre of Kyiv – some 34,000 people were murdered in a single action. I thought before I went I should pay a visit, especially as it has gained literary connotations since. The book with that title, Babi Yar by A. Anatoli (Kuznetsov), was described by its author as ‘a document in the form of a novel’, but even that was a disguise, as it is clear that every event described in the ‘novel’ really happened. Anatoli’s book includes the testimony of the only known survivor and eye-witness of the events, a woman called Dina Mironovna Pronicheva: her testimony was later included, controversially, in D. M. Thomas’s novel The White Hotel. However, once I was actually in Kyiv it seemed a visit was never going to be possible: several people said they had only barely ever heard of it, others said the ravine had been filled in and the park re-landscaped, hardly anyone would admit to knowing where it was. I didn’t push the point. 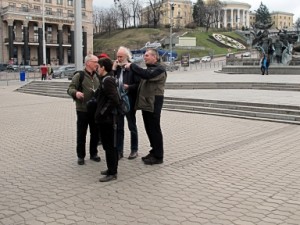 One morning I went with a group of fellow visitors from the convention to visit Maidan Nezalezhnosti – known in the West as Independence Square. We were a multinational lot: from Sweden, the Netherlands, Belgium, Switzerland, France. The photos show what we saw that cold day. Most major cities have similar large open spaces where crowds gather, where speeches are made, where ceremonies are conducted. That was how Independence Square seemed to be. In the last few weeks the world has gained an altogether different image of the place, as many of the people of Kyiv are engaged in a violent protest against their government. The word ‘horrified’ rises again: this complex, historically important and often beautiful city is 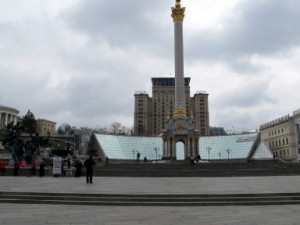 tearing itself apart. Of course, the chances are remote that any of the people I met in Kyiv are directly involved, but even so it is extremely concerning. I am especially thinking of Alexandr Vasilikovsky (who invited me to Kyiv and who spent hours taking me around), of Yuliya Kiro (who gave up a day of her university studies to take me around the galleries and memorials of the city), and of Natasha Krynytskaya (who acted as my interpreter and translator). These are the people of Ukraine I know best – I can’t stop worrying about them.